I simply was trying to make “ally’s “ against Christianity (fascism).

Damn you are dense. And after we finish with the Christians, we are coming after the fucking Pagans. Everyone will believe as we believe or we will lock them in a small box and cover them with dirt for eternity. (We have to have some sort of Atheist punishment equivelent to the theists.) YOU REALLY ARE FUCKING DENSE.

Dude, that’s exactly what my goal coming here was! A secular society! I just didn’t use the right word.

How is that our fault?

Being a pagan has made you think like a little sheep with no chance of deciding your own destiny. You actually believe you are a member of a “more intelligent minority.” Fuck you are ignorant. That is exactly what the theists think.

As long as the more intelligent monority sits around and plays the “CYNIC,” the ignorant majority will determine our destiny.

Atheists and agnostics tend to be relatively higher IQ.

You poor ignorant fool… you are neither Atheist nor Agnostic, and you have no idea at all what these words mean by your very use of them. Where do you imagine your IQ to reside? And what in the fuck do you imagine it would mean anyway? IQ does not measure one’s ability to function in the world and it certainly can’t prevent a bigot from spouting nonsense. Why do you keep missing it… YOU ARE THE SHEEP!

You have supped on the poison the limits your ability to think rationally. You spout utter and complete nonsense and only imagine, in your own little world, that you are making sense. The idea that you are siding with Atheists in your bigotted brain would be laughable if it were not so fucking prejudicial. The Christian’s freedom to express their ideas is also YOUR FUCKING FREEDOM TO EXPRESS YOUR DIPSHIT IDEAS.

Dude, that’s exactly what my goal coming here was! A secular society! I just didn’t use the right word. If we don’t fight, then we deserve to be pushed around by Christians! Right now Alabama is going backwards on freedom of choice (undoing Roe vs Wade). If atheists, agnostics, non-Abrahamic people don’t fight - it’s going back to the dark ages. Next we’ll be praying in school!!!

What you have is a complete inability to express yourself and a total lack of skeptical thinking skills. What you present here is a “slippery slope” fallacy with an appeal to emotions. You are of course using faulty logic and your ignorance is showing.

You have made inane assertiosn, offered no facts or evidence, and then insisted that we “fight.” Completely fucking stupid.

Christians are attempting to get the Government to support prayer in school. This is strictly against the constitution of the USA and when the separation of Church and state is violated by the Schools, “American Atheists” has been doing a great job of winning court cases. Perhaps you can join their site; American Atheists Legal Center | American Atheists

However; religious bigotry is against the law and you are likely to be arrested for your narrow minded bullshit.

Atheists and agnostics tend to be relatively higher IQ. But if we sit by, the sheep will decide our (and our children s destiny)!!!

Hate to break it to you - but you have not demonstrated yourself to be apart of any “we” AND your inability to answer questions, or defend your position places you squarely in the sheep pen

It is not that I am hostile, I just reject your position.

@David_Killens Or the better saying would be “I reject your reality, and substitute my own!”

Atheists and agnostics tend to be relatively higher IQ

@Socialdarwin From my experience, I find atheists and agnostic to be more sensible and rational, when it comes to anything related to religion and the supernatural. I would not make your statement, though, as that is a claim that requires evidence to prove that statement as true.

@Socialdarwin You are not understanding what the folks here are saying, which basically comes down to the fact that they see your Deity or God or whatever, as no different than the theists, that come on here and troll, trying to convince us to believe in God, or at least, their God. As others have pointed out, all you are doing is substituting the God of the theists, with whatever God or Gods that you believe in, as a pagan, when, it is not really any different, in terms of some sort of Higher Power or Supreme Being, commonly called “God”. They are not falling for it, so I suggest that you stop. Thanks.

I find atheists and agnostic to be more sensible and rational

[half-joking]
That is a selection bias. See if we sort everyone into two piles:

Then you test each group to see which has a better grasp of reality.

It shouldn’t surprise anyone that pile B does at least slightly better than pile A!
[/half-joking]

@Nyarlathotep Oh, I definitely fall in Pile B. Then again, I am much better at falling in a pile of s***.

Well what I"m trying to say without saying it (half-joking): that when we sorted all the people who believe in magic into one pile; that pile was doomed to be outperformed by the other pile; in all kinds of activities.

Well what I"m trying to say without saying it (half-joking): that when we sorted all the people who believe in magic into one pile; that pile was doomed to be outperformed by the other group in all kinds of activities.

@Nyarlathotep Does that pile, happen to include religious believers, especially theists, by any chance?

Big Neervav has almost gleaned the core of the current situation. No one gives a fuck about your god. It is your thinking and your ability to reason that are “Theistic in Nature.” You argue and talk just like a Theist. Your assertions are not any different than the assertions the Theists make. So to mend Neerav’s post…

“You are not understanding what the folks here are saying, which basically comes down to the fact that they see your arguments against Christianity or whatever, as no different than the theists, that come on here and troll. You are trying to convince us to believe in, your special brand of bigotry and you do not even realize the poison shit you are shoveling. As others have pointed out, all you are doing is substituting the Christian paranoia of Atheism with your own brand of pagan paranoia of Christianity. Your ideas and your ability to reason are not any different, in terms of bullshit, unfounded assertions, bigotry and prejudice, than the assertions of the theists. The skeptical thinkers on the site are not falling for it and your inability to listen to people and respond intelligently is only serving to make you look more and more irrational.”

I don’t really understand what this forum is for.

The introduction on the main page clearly indicates the reason for the site. The fact that you can neither read nor locate relevant information is not surprising. Let me send you the link…

" Atheist Republic provides valuable news, resources and a medium for atheists to freely express themselves in a variety of ways, including discussion forums, blogs, local chapters (Atheist Republic Consulates) and our podcast. " 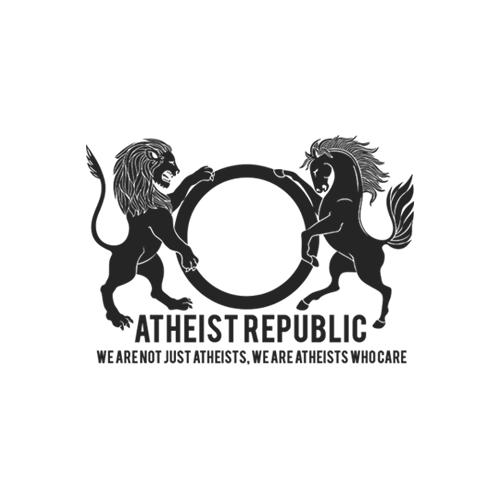 Welcome to Atheist Republic! A Community for Atheists Worldwide

Atheist Republic is a growing group of godless heathens who provide community, resources, advocacy and encouragement for atheists all over the world.

The Christian dogma is the majority right now.

That claim is as ludicrously stupid now, as it was when you first made it.

Not to mention factually wrong. Around 87% of the world population are theists. This is split between about 3000 religions, which includes about 200 christian sects . The very word ‘christian’ is not precise and may not reasonably be use to describe the beliefs of another.

There are over 7 billion people on this planet. As far as I can tell, about 2.5 billion are christian. From memory I think Muslims have a about a billion members.

What I love about the Christian faith is that on any given day 1/3 of any random group of Christians, will tell you that the other 2/3s are going straight to hell for their false beliefs.

We can count ourselves lucky that Christians are no longer allowed to burn alive or hang dissidents. There is no doubt in my mind that some of the literal believers would burn every atheist they could get their hands on at the very least.

The catholics would start with atheists and and then get stuck into the protestants et al. The et al including Muslims and of course Mormons and Scientologists. The Catholics would broadcast the auto de feys via cable, and make a fortune doing it.

Dude, that’s exactly what my goal coming here was! A secular society! I just didn’t use the right word. If we don’t fight, then we deserve to be pushed around by Christians! Right now Alabama is going backwards on freedom of choice (undoing Roe vs Wade). If atheists, agnostics, non-Abrahamic people don’t fight - it’s going back to the dark ages. Next we’ll be praying in school!!!

And then after we fight and win this big fight and eradicate all the Abrahamic religions and establish a worldwide secular society, shouldn’t we outlaw and legislate all religious ideas and thinking? Introduce death sentences against secular non think? Encourage family members to spy on each other just to be certain? Will we all be expected to become pagans? Will being an atheist be enough?

All you would get is a growing number of aggrieved people feeling the need to fight for the freedom to think or believe whatever they want including Jewish and Muslim myths if they choose.
You do not beat oppression by becoming an oppressor, you only end up endorsing it. Instead, you educate people. You spread reasonable ideas that show what a nonsense theism is and you encourage them to engage in crtical thinking.
That is what this forum is for, not for agitating another potential form of oppression. It’s a slower process than revolution but it has proven a far more effective and long-term solution.
One hundred years ago in many countries dominated by Abrahamic conventions, homosexuality, abortion and euthanasia were illegal. Atheists, brave enough to announce themselves had less legal rights than Christians.
Today atheists number 30% of the population here in Australia as per our census details, and our society, by using only peaceful demonstrations and reasoned argument and appeals to humanity, have opposed the Christian dominated conservative government and enforced the legal rights of gays and atheists, the right for women to control their bodies, and currently several states have legalised assisted deaths; others, against theocratic adherents, are moving towards the same goal.
Better you arm yourself with well reasoned appeals to intelligence and common sense than with undefined emotional calls to fighting and rebellion. The ‘fight’ is already on and progressing steadily if slowly.

edited …I would add too that a lot of the support for same sex marriage came from Christian churches organisations and individuals. We must have a different brand of Christianity to what they have in Alabama, but theirs can be overwhelmed too by the power of reason.

The catholics would start with atheists and and then get stuck into the protestants et al.

Atheists might have an advantage in they’d see nothing wrong or immoral in avoiding their own unjust immolation, so I’d lie my arse off under such circumstances.

Religion is not a sound basis for this life, let alone another one after we die.

I think it worked well in small groups, as a cohesive and unifying focus. It’s counter productive in a post industrialised, and globally connected world.

You do not beat oppression by becoming an oppressor, you only end up endorsing it.