IMO, if people evolve beyond superstition then the “world” will be ready (human society).

HOWEVER to arbitrarily remove religions or the religious will not make a better world (human society).

Religion is a double-edged sword. It offers many positive benefits to society, and it has some obvious drawbacks. Some aspects, such as community and support, can be hard to find outside of religion. What other activity offers such a wide and all-encompassing community?

In some societies communities (states, kingdoms) are at odds with other communities, but since they have a religion they share, that offers a binding and commonality, which may prevent conflict.

And although religion may offer a false support, at least it is there. For those grieving the loss of a loved one, even the false belief in the afterlife still offers emotional support in a time of personal loss and confusion.

IMO it is not a black and white issue, religion can be a benefit, yet a great handicap, even a source that leads a society in the wrong direction.

Disagree: People are stupid. Just look at all the stupid shit that is waiting out in the weeds to replace religion. There may be something to the idea that human beings are hard wired to think religiously. To imagine answers where there are none and to invent magical explanations. A world without religion may in fact be a world without fantasy. It may be an entirely different sort of being on the face of the planet that is not human at all. Finally, any attempt to eliminate religion makes us no better than the evangelists, pushing beliefs onto people who are not interested.

Instead, I submit to you that the world will be a better place when more people Christian, Atheist, Buddhist whatever, learn to think rationally, accept differences and communicate openly.

HOWEVER to arbitrarily remove religions or the religious will not make a better world (human society).

Yair. The needs religions meet will probably be round for a long time yet. Although probably not in my life time, I’m hoping religion will become extinct by becoming irrelevant.

In my life time I’ve seen my ‘wowser state’. Go from puritanical to mainly secular. Many churches have closed. There is shortage of Catholic priests and flocks. Many priests manage 2 or 3 parishes, with he majority of their congregations being geriatrics like me.

I completed the census form last week. Top of the list about religion is “no religion”. In recent years, a lot of people wrote ‘Jedi’ as their religion. In the last census it transpired that Oz has some 48,000 Jedi. That means we have are more Jedi in Australia than some of the minor christian sects.

The ‘why’ of religious irrelevance? I don’t know for sure. I can only list some correlations which seem to be found in all countries which have become more secular within say the last 50 years:

Affluence. When people have a high standard of living they have the luxury of navel gazing. They began a asking religions question they cannot answer, even questions for which we have no answers, yet.

Education; With formal education hopefully comes critical thinking. This is anathema to any belief system built on blind faith, as all religions are, as far as I can tell.

However, I don’t know to what degree, if any, the above factors apply to the PRC. I won’t pursue this line of thought here because I lack the evidence needed for an informed opinion.

No, it won’t brothers and sisters. All them ex-theists will be out of control murdering, raping and stealing from each other and all. You can betteth thy bottom-most dollar they will be as lost criminal-minded sheep without absolute morality to contain their base appetites and uncontrollable urges to sin.
I give thanks I am saved from all that potential evil by the power of my Atheism.
Thus squawks the cockatoo.

Seriously, a better place? Depends on what replaces religion, but religion or faith or belief in the supernatural satisfies a lot of needs for a lot of people without which there is no telling how they might end up behaving. Want to swap out religious zealotry with political fanaticism? Yes there isnt much difference but I’d rather stick with baby Jesus and the bizarre and faulty explanations of loving gods and religions of peace. Anything else might be fucking far worse.

As with most other posters…I am in the affirmative, with a couple of provisos.
1: That there is a universal standard of education
2. That there be a Universal Basic Income
3. That politics becomes a fight of beliefs to benefit society not enrich one’s self and ones mates.
4. That the pursuit of power for power’s sake becomes as unpopular as syphilis is today.

Then I think we could safely dispense with these childhood religious fables and replace them with the urge to explore the stars, to enrich our planet, to do better by our selves and our neighbours.

If we rip religion out now, without transition, then religious leaders will whip their ill educated adherents into vicious mobs destroying all in their path while they dance, fully robed and accoutered on a mountain of skulls.

That there be a Universal Basic Income

Christians ain’t gonna like that. Strangely to me, that many seem to be terrified of anything smacking of socialism or any kind of universal social justice. Fair enough I guess, as no less a person than Jesus himself is recorded as saying:

Then of course there’s the controversial view that wealth cannot exist without poverty. I don’t know, has never happened so far in my understanding . Perhaps historically, say in ancient Egypt.

What would universal equity cost? Can it be done, even in theory?

Various armchair socialist I’ve known have had the attitude that they are absolutely in favour of the have nots having more-----As long as it doesn’t mean said socialists will have to have less.

I suspect universal equity would be possible under a different economic system than capitalism. EG one without the rampant consumerism presently enjoyed by the haves. (including myself)

I suspect universal equity would be possible under a different economic system than capitalism. EG one without the rampant consumerism presently enjoyed by the haves. (including myself)

https://worldpopulationreview.com/country-rankings/countries-with-universal-basic-income
“In 2018, Finland conducted a basic income experiment with 2,000 randomly selected unemployed citizens. The recipients were given 560 euros ($640) monthly and reported being happier and in better health. They also reported that, although the amount was only 50 euros more than what they were previously receiving from unemployment benefits, there was no reporting to receive the income.”

The pros outweigh the cons. Simply put by taxing the VERY wealthy by less than 2% of their net worth now, then UBI could be implemented in Australia at least.

It means that:
Students could study what they are truly interested in…
That road usage and environmental damage would plummet
Employers would be forced to pay a living wage for fulltime work.
Yes, some people would become lazy and refuse to work. (look at the unemployment rate to give the lie to that garbage)
Art and Musicians could flourish without the constant dread of penury ( I been there) or disdain from the “gainfully” employed.
The ill and the aged could be looked after by FAMILY without penalty or intrusion from bureaucracy.
The bureaucracy currently oppressing the unemployed and unemployable could be redeployed.

If you want to work, to gain those consumer fripperys such as $450,000 space jaunts with Virgin and not haunt the secondhand shops it is then YOUR CHOICE. A civilised society would prize that.

Here’s a shock…Countries that have tried UBI (in one way or another) .

Students could study what they are truly interested in…

Yeah, as it was when I went to university, part time while working full time.

Americans, read the following and weep:

There were no fees. One had to pay, from memory , $300 per subject***to belong to the student union. It was very active and provided a range of services from cheap lunches, to a tavern, a creche and a bunch of free clubs. A person who had conscientious objection to a union could pay the same amount to a charity of their choice.

I had three formal contact hours a week. I was granted study leave of 3 hours a week, which included travelling time. My employer paid the union fees. I had to buy only the books.

Quite a bit different today. There are fees. Those who are unable to pay up front are usually entitled to access HECS (Higher Education Contribution Scheme) Once studies have been completed, payments become due when a person reaches a certain level of income.

***The structure of most undergraduate degrees at that time was 4 first year subjects, 3 second year subjects and 2 third (final) year subjects. Obviously, the professions differed)

The world will be a better place if people are not delusional and people think rationally and sympathetically. Religion has a good side as well as a negative side. The good part of religion is that it offers support and community, offers consolation when someone dies ( u might see him again in heaven). The bad aspect of religion is that it’s homophobic. It’s discriminate and judge’s homosexuals and shun/ eschew premarital sec even in serious relationship. It is against evidence but advocate faith. Religious teachings outrages reason. Religion is an enemy of evidence and reason. Thats why without faith we cant please God. When we talk about faith, we mean believing in thing’s without sufficient evidence. We don’t have Faith that ocean exist, we know based on evidence that it does. Thomas was reprimanded by Jesus for demanding for evidence that he was seeing the true Jesus and not an illusion. Christ showed him his punctured palm after expressing his disdain and disappointment for Thomas initial unbelief

Poverty and crime breeds religiousity. Poor people/ poor and crime riddled nation’s are more religious. It’s so because this social ills leads people to believe in an all powerful God who cares for them and Will keep them safe. A Providence God that will provide for them their needs. Though not all poor people are religious, though most are! There a poor and broke atheist; though they are few. Few people have the courage to be atheist while in abject poverty. Developed regions like East Asia and Europe tend to be less religious unlike the Caribbean.

I think people will have one less reason for wars. 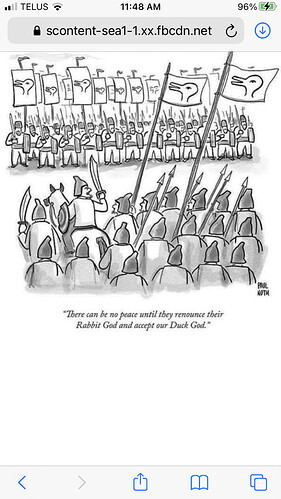 I think people will have one less reason for wars.

Indeed. They will then simply invent new ones.

A favourite example comes from Gulliver’s Travels; The war between Big Endians and The Small Endians; the war was over on which end a boiled egg should be opened.

Religions are simply human inventions reflecting the people who invent them. They are not an outside agency which causes wars. They are fantasies inside people’s minds. Religions do not create warts, although people love to use their human-invented beliefs to justify killing other people on vast scales. (IMO) Lilliput and Blefuscu are two fictional island nations that appear in the first part of the 1726 novel Gulliver's Travels by Jonathan Swift. The two islands are neighbours in the South Indian Ocean, separated by a channel 800 yards (730 m) wide. Both are inhabited by tiny people who are about one-twelfth the height of ordinary human beings. Both kingdoms are empires, i.e. realms ruled by a self-styled emperor. The capital of Lilliput is Mildendo. In some pictures, the islands are arranged like...