This is a hypothetical question I heard yesterday from a guy I work with.

It seems to be a common scare tactics type question that they try to scare you into believing. But it doesn’t bother me because I have concluded to myself, as I cannot speak for all Atheists, that everything in the Bible is fictional.

To my furher my question. Why do Christians try to scare us into believing?

Is that how they believe? Through fear?

The usual suspects who peddle this, of course, never ask themselves the proper analogous question, and you can dismiss them safely by reminding them of this.

Indeed, you can remind them of several other questions that they obviously never had enough functioning neurons even to imagine the existence of, let alone try and answer. Such as:

[1] Why would any entity capable of fabricating an entire universe, be so fixated by what members of one species of hairless ape on one small planet do with their genitalia, as to construct a special torture chamber for those that fail to conform to manifestly primitive strictures on the subject? While at the same time, not sending into the same torture chamber, members of other species whose genital manipulations are in many instances far more bizarre and shudder-inducing?

Adore me, follow my commands, worship me, love me unconditionally or I will fuck you up.

Religion poisons the well in how we perceive our lives. They postulate that once one dies, there is no rest but you either go to a place of wonder and happiness, or pain and deepest despair. There is no out, you can’t escape.

With that in place, this leverage forces one into a predicted course of action, to attend church, sing the songs, listen to the dude up front, and nod your head at the appropriate time.

The usual suspects who peddle this, of course, never ask themselves the proper analogous question

My favorite response … “what if you pick the wrong religion”?

I have a stock answer of sorts, as what he is using is a variation of Pascal’s wager.

Firstly what objective evidence can he demonstrate that Hell is real? If the answer is none then why should I fear it anymore than the Bogeyman. Then ask him since he believes it is real, and you do not, why isn’t he paralysed with fear that he has chosen the wrong deity, or even the wrong version?

The flaw in Pascal’s wager is it assumes risk it cannot evidence, and then assumes all the risk rests with atheism. As an atheist I don’t believe there is any risk, so the fear of getting “it wrong” should all rest with those who do believe in the threat of Hell.

My usual reply goes very much like this one from Godless Mom; 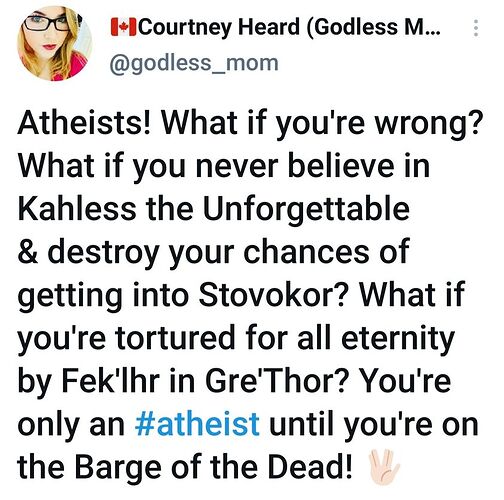 She sound delightful, I know they’re supposed to spread the word. no matter how stupid the word is, but theists who use that threat as toothless as it is, have all the charm of a mass grave.

To which I reply… You mean, your version of hell or all versions of hell? You do understand that on any given day, and 1/3 of the Christians out there in the world will swear on the bible that the other 2/3s are going to burn in hell for following false teachings. So, do you mean, Just your version of hell or all the Christian versions of hell? And what about Muslim Hell? Did you know Buddhism, Jainism, Hinduism, Taoism, Zorastrianism, Wicca and some others also have Hells or places like hell. I got another question for you. If hell exists, given the possibilities out there, how could you possibly be right? Can you demonstrate you are right, that you believe in the right Hell, and that all other versions of hell are wrong?

My favorite response is “see you there, you hypocrite”.

One counter I appreciate is the loving god thing. It is claimed this god loves us. But this all-knowing god knew what we would be like yet makes it almost impossible for skeptics like us to get to heaven.

If this christian god loves us, it made it impossible for some people to get to heaven.

I try to do the right thing, I abhor harming others, I don’t even rape little boys. Yet because of who I am, I’m fucked by this god?

To the best of my knowledge, I believe Satan still has a restraining order in effect keeping me from getting any closer than one mile from Hell. (Wherever the hell Hell may be.) Anyway, if I remember correctly, I think it had something to do with Satan being concerned I might take over his throne.

Edit to add: So, basically, I’m not too worried about it, even if it IS real.

There is one thing that has me a bit perplexed about Satan and Hell. Satan has always been the essence of evil who wants to lead humanity astray and make others do evil things for him, right? While at the same time, he was given dominion over Hell to punish those who do evil. Naturally, that begs the question, “Why would Satan want to punish those who do the evil things he wants them to do?” One would think good ol’ Lucifer would want to REWARD those who do bad things. Seems to me that Hell should just be one big eternal after-hours party zone.

I believe Satan still has a restraining order in effect keeping me from getting any closer than one mile from Hell.

That’s a really cool response, when someone tells you to “go to Hell.”

I may plagiarise that…

That’s a really cool response, when someone tells you to “go to Hell.”

I may plagiarise that…

Help yourself. I actually stole it from somebody else a couple of years ago.

What if Hell exists & you’re wrong?

What the hell is wrong with you? Don’t you know better than to listen to a bunch of Leprechauns? Those deceptive little bastards never tell the truth about anything. Good grief! I suppose you ALSO believed them when they told you about a pot of gold at the end of a rainbow, huh? Damn, don’t be so naive and gullible.

As the course of Christianity is mainly a story of mankind’s suffering, ignorance, and misery, simply obviating the concept of hell and threatening nonbelievers with the religion itself should suffice.

I’m all for listening to the leprechauns; they make some totally rad breakfast cereal and may be a fine deterrent to approaching Jehovah’s Witnesses at the house. 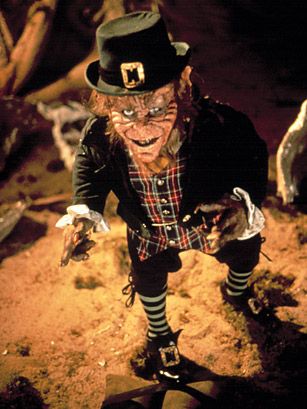 I’m all for listening to the leprechauns; they make some totally rad breakfast cereal

Okay, fine! I admit I DO enjoy their cereal. Other than that, though, they are lying little shits.

Don’t you know better than to listen to a bunch of Leprechauns? Those deceptive little bastards never tell the truth about anything.

Remember, Jesus was a leprechaun, as documented/retold in this beautiful hymn: 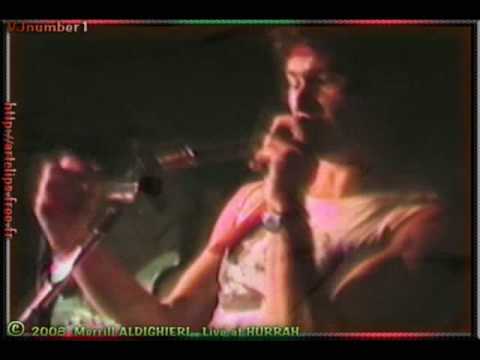 Recently, some whackjobs posted on Facebook a pile of apologetic faeces, claiming that science had validated their cretinous assertions about the mythical lava troll and its fetish dungeon purportedly situated in the Earth’s core.

Someone ended up becoming really butthurt when I pointed out that this was garbage.

Apparently the individual in question who threw a Karen fit over my pointing this out, was unaware that geophysicists could detect any hollow space in the Earth’s core simply by using seismology. Funny how no such hollow has ever been detected, or reported in the relevant peer reviewed scientific literature.

There’s also the little matter to factor in here, that the pressure in the Earth’s core is 3.6 million atmospheres (a useful elementary introduction to the relevant concepts can bhe found here). the only way a hollow could exist there, is if it was filled with gas at the same, or greater, pressure, otherwise the hollow in question would collapse and be crushed out of existence by the pressure of the surroundng material.

There’s also the little matter of how anything sentient could possibly exist in an environment where the ambient temperature was over 5,000°C. At this temperature, gold and platinum are no longer solid metals, but gases. Rhenium, one of the most heat resistant elements in existence, is a liquid, and becomes a gas if the temperature is raised to 5,630°C. For that matter, carbon becomes a gas at 4,300°C, and organic compounds are reduced to their constituent elements at considerably lower temperatures than this, so we won’t be seeing any organic chemistry under these conditions as far as I can tell.

Of course, the usual suspects will wibble on about “souls” as if these entities actually exist, but even if this assertion turns out to be something other than the product of the rectal passages of mythology fanboys, why would a disembodied soul have any need for thermal properties of any sort if, as the usual suspects assert, this entity is “immaterial”? Indeed, the whole point of erecting the “immaterial” assertion by mythology fanboys, is to permit all sorts of fantastic interactions to become something other than the province of fanciful imagination, and to dismiss all the usual constraints applied by physics, chemistry and biology.

Yet at the same time, the same suspects among the mythology fanboys seem to think that all of the usual human experiences mediated by physics, chemistry and biology would somehow affect this “immaterial” soul. Special pleading and fabrication at its most egregious.