The Texas Taliban Target Everyone, $10,000 Reward

Are you immediately taken care of in your home and life? Personal. Job. Good home. Social. Medical.

Are you a woman? Are you needing an abortion now? Do you get access? Is your neighborhood/community basically positive (good roads, low crime, etc)?

IF listening to “politics” is putting you in survival mode then you aren’t thinking anymore or enjoying - you are in fear (future fears). STOP listening or reading for awhile. Take a break. Find an enjoyable hobby or cause (homeless? Old people volunteering? Big Brother organizations for disabled kids)…

Start finding some good and living your own life bit-by-bit. Let others fight their own fights (Constitutional lawyers, Planned Parenthood, etc).

There seems to be a miscommunication here, and perhaps it was I who failed to communicate what I’m saying clearly. But at no point did I say anything about registering atheism as a religion. My idea was to create a religion that emphasizes science and humanist values, allowing us to use the same “freedom of religion” arguments that the Right likes to tout. If my understanding is correct, this is the strategy employed by Anton LaVey and the Church of Satan. I also did not mean to imply that this would be exclusive to atheists, but open to everyone who is against or does not conform to the religious right, including even non-Dominionist Christians. And I was half-joking anyway. 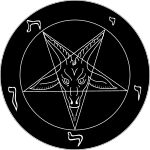 The Church of Satan is a religious organization dedicated to Satanism as codified in The Satanic Bible. The Church of Satan was established at the Black House in San Francisco, California, on Walpurgisnacht, April 30, 1966, by Anton Szandor LaVey, who was the Church's High Priest until his death in 1997. In 2001, Peter H. Gilmore was appointed the position of High Priest, and the church's headquarters were moved to Hell's Kitchen, Manhattan, New York City. The church’s headquarters is now loca Th... 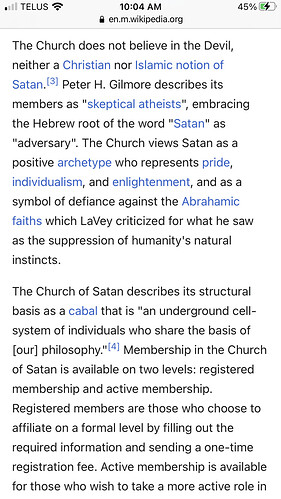 I currently work as a teacher’s aide and make less than $10/hr. I live in a room I sublet in someone else’s house. I am in grad school and rely partially on financial aid. I’m doing fine right now, but I do have a history struggling with unemployment and homelessness.

I am not a woman, and I am not, never have been, nor ever will become pregnant. But that does not mean I do not empathize. And this matter extends far beyond only abortion and women. As a disabled person who has struggled with unemployment and homelessness, I have personally ran afoul of the “pull yourself up by the bootstrap” crowd. And when the President of my country publicly proclaims that I should have my citizenship revoked simply for being an atheist, I think I have justifiable cause to worry about my personal safety.

All hands on deck for the abortion fight. Whatever you feel up for of course. Voting for like minded candidates etc. We need men on our side, too many seem to not think it’s not their problem. My condolences for living in Oklahoma, I know from a personal friend there that she needs to be careful who she lets know her pro choice views for the sake of her job and possible safety. Be safe

“freedom of religion” arguments that the Right likes to tout

no such animal; at least not in the USA

apparently so does registering atheists as a religion. Cause minority religious groups always get their way…

For some years there was only “other”, so a lot of people wrote “Jedi”. In the 2006 census there were 65000 Jedi in Australia. That’s almost as much as the official JW membership in Oz, of around 69,000. So in fact, probably more.

Abortion is a guaranteed right here in all states. Under our constitution, a state may not pass a law abrogating a Federal Law. The Federal government may strike down such a state law. Conflicting laws are nor permitted

Abortion is a medical procedure covered by Medicare. I don’t know how that works in practice in terms of a doctor ‘bulk billing’ Medicare. I think the patient may have to pay a ‘gap’ . This amount is determined by the doctor and is not subject to control other than by market forces.

This may be accurate given the decade passing…

A third of Canadians (32%) say they are atheist, agnostic or have no religion, compared to only 19% of Americans. 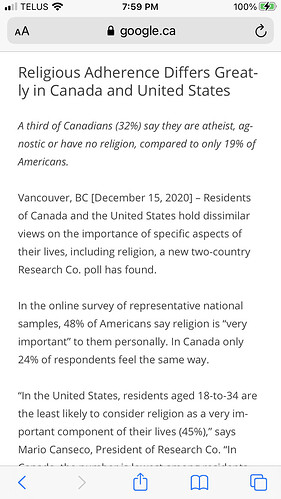 Once Stats Canada releases their figures it’ll be more accurate.

Probably many more. So many Canadians are just too nice to say anything controversial.

In Oz, it’s the very beginning of payback time for those of us who endured a life time in which arrogant religionists controlled our society, indirectly through societal norms and directly through many many laws.

Won’t happen before I die, but it will happen eventually. When my country is sufficiently secular, religions will lose their tax exempt status. The priestly caste will be obliged to get real jobs and no longer able to leech of the community.

Any organization that attains power becomes corrupt. The leadership lose sight and just want to amass power and wealth. Even atheists.

Also, and as Boomer points out, atheism tells us one thing, and one thing only about someone, so they might be a very diverse group, making organising them a bit like herding cats.

I choose to dismantle the organizations of corruption and deceit. I choose to work away at taking down the foundational pillars that protect such organizations, such as making them open up their books and taxing religion.

I choose to educate children in critical thinking and amassing valid knowledge, I believe that delivers a more favorable long term outcome.

I can only agree, maybe we should start a club? Oh right, my bad…

When my country is sufficiently secular, religions will lose their tax exempt status. The priestly caste will be obliged to get real jobs and no longer able to leech of the community.

I hope you’re right. I think it will eventually happen here too, the younger generations are definitely less inclined toward religion. I thought we were well on our way to a more secular society. After all, we managed to get gay marriage legalized, something vehemently opposed by the religious right, but all it took was one corrupt, charismatic leader willing to exploit peoples superstitions and a couple of unfortunately timed deaths on the supreme court for us to have major set backs. Private businesses no longer have to serve you on religious grounds or provide insurance that has birth control options. We are poised to lose the right to abortion as the supreme court, stacked with people openly opposed to any abortions on religious grounds, is about to hear a case that will let then cancel that right. The federal court is arguing against the Texas abortion ban on the grounds that it supersedes the federal law giving women that right. That law is about to go away.

According to official polls, the results for Norway is that in 2020, 47% of the population that are 16 or older belong to a religion. It is somewhat unclear to me what the actual question asked was, but the question was obviously not if people actually believe in God/a god, or are merely members or passive member of a religion that haven’t bothered to terminate the membership. A poll done by Norwegian Humanist Association in 2016 indicated that 30% believed in God/a god, 21% were unsure, while 48% said they didn’t.