Now that my favorite holiday (Halloween) is over, we’re heading straight into my least favorite time of year, Christmas. The religious aspect of this holiday means less than nothing to me, and so does the part where you have to buy gifts for everybody else.
I have no issue with buying gifts for the kids in the family, they’ve been told about Santa Claus since they were old enough to understand, and when they learn that’s it’s a lie, they still expect to find gifts on DEC. 25th.
But why do we have to buy gifts for everyone else? In our family, there are so many adults to buy for, that we draw names on Thanksgiving day so we only have to buy for 1 other person in the family, much easier and cheaper. But all it turned into was everyone giving each other a list of what they need/want, so we knew what to expect, no more guesses or surprises.
After a few years of this, I realized that whoever got my name would ask for a list of suggestions, but when the big day showed up, I never got anything on those lists.
The last 2 years I participated in this, my now late older sister and our son drew my name, asked for suggestions, and then completely ignored them.
When I finally decided to ask them both why, they both said that they didn’t feel “comfortable” buying any of the things on my list due to their religious beliefs.
This was at least 15 years ago, and I haven’t participated in this holiday since then. Most of the things on my lists where the same things they would be now, music CD’s, or books, or specific T-shirts for my collection. But because I’m an atheist, a metal-head, and a fan of horror literature, along with a collector of horror/Halloween and or concert shirts, none of my suggestions met with their approval, so they ignored them and got me a bunch of useless items that they thought I needed or would like.
Now, I just do the best I can to ignore this holiday and not ruin it for my wife or kids/grandkids. The first few years after I quit participating, I was a little bitter and angry, and it became a not so merry time of year, but now I can just go along with all of festivities but also keep my distance and let everyone else enjoy it.
So I’m now the family Grinch/Scrooge at this time of year, and I’m fine with it. I still hate this time of year though, the commercialization and the religious aspects of this holiday don’t due anything but piss me off now, but I’m still learning how to just ignore it all and get through these last 2 months of the year.

I love Christmas. Like you, it has no religious connotations to me, but I still love the season, the lights, decorations, trees, the carols, and all the rest.

One of my theist friends asked me once why I sing carols if I don’t believe in the god stuff. I pointed out that he sings songs like Rudolf the Red Nosed Reindeer – does that mean you believe in flying reindeer?

As for me, I only have to relate to my wife and kids. My wife is as religious as me (i.e. not at all), and the kids find their own pretty good arguments against the existence of god(s) independently of the input from us, the adults. The only reason for me to do anything christmasy is for the kids. And for the seasonal food that I love eating. Other than that, my feelings about christmas is pretty much along the lines of this: 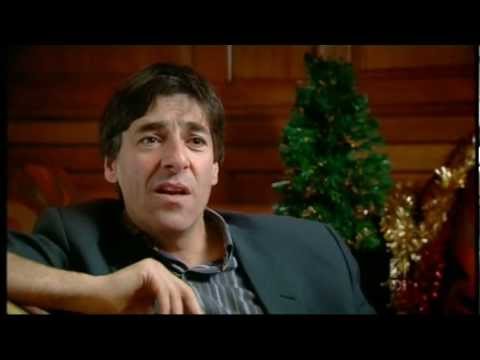 I’m buying Chocolates for all the Girls / ahemmmm… / Young women in the office. Been trying to contact See’s with no luck. I know they ship internationally if I can get hold of them, Gonna pick up 4 1 pound boxes and 1 2 pound box. Great chocolates. Better Christmas Gifts.

The gifts are for the Korean staff. The foreigners won’t do anything for each other. Perhaps go out and get drunk together. ( I won’'t be going. )

Christmas is great. I get to sit along at home, sleep in late, and fuck all the the outside world. It’s a wonderful Holiday. I also love Halloween by the way.

and fuck all the the outside world.

I always thought that was snow

. FUCKING love it! Didn’t feel an ounce of guilt the first year I celebrated it. For myself, it’s a celebration of the solstice (more a recognition) and the pagan symbols are fun and joyful and warm and tasty

I love the gift giving and family time.

it’s a celebration of the solstice

That’s Yule. And with Yule you get Blót. And tasty, tasty food and ale.

See’s candy is and will always be my favorite. Do you have a favorite flavor? Mine will always be their Bourdeau, especially the dark chocolate ones. I do like all of the food that comes with celebrating their imaginary savior’s birth. 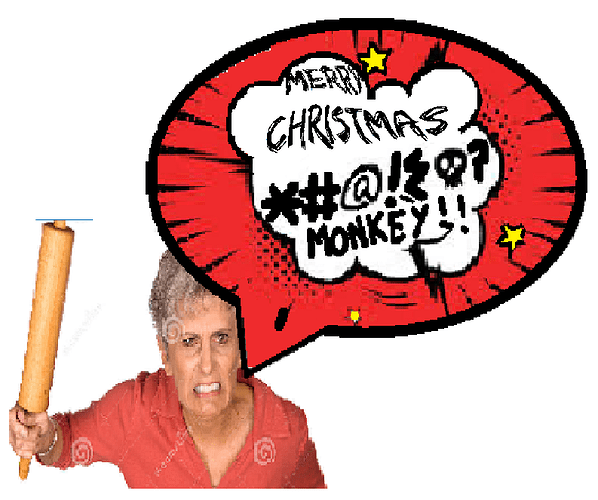 Christmas is the only day off that I can think of in the U.S. that’s pretty much universal among non essential workers. It seems to be the last holiday that companies wouldn’t dare to make people work. That’s pretty much in keeping with christians ignoring anything in the bible that’s inconvenient. Despite the bible being pretty damn clear about not working on the Sabbath it doesn’t stop companies with “christian ethos” from making the peons work on Sunday. I guess I should be glad that even people who think the bible is the infallible word of god ignore some things in it since it says you’re suppose to kill people who work on the Sabbath.

Christmas. The religious aspect of this holiday means less than nothing to me, and so does the part where you have to buy gifts for everybody else. 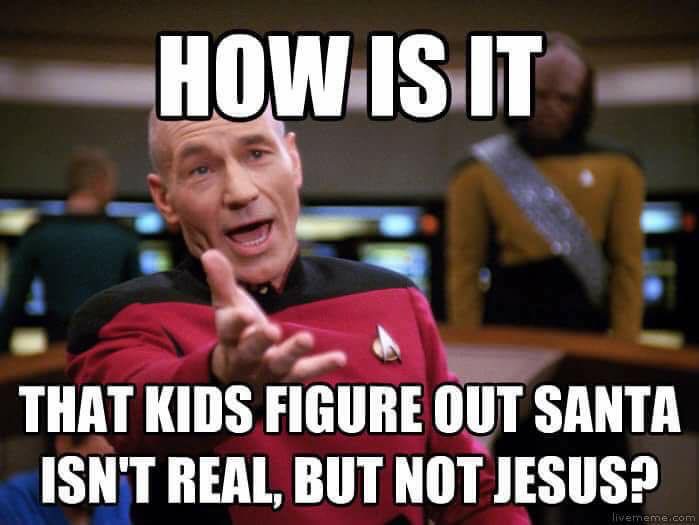 I hate all the EXPECTATION for gifts from adults and teenagers, but I don’t mind giving in general if I can afford it. I enjoy the general human spirit that Christmas seems to bring out above other holidays. And I enjoy the human spirit in many musical pieces. It’s not hard for me to separate the silliness from the quality, craft, and good will.

I always keep in mind just how many aspects of the christian celebration are rooted in non-christian sources, have a private laugh to myself, enjoy the food, the people, the time off, the beautiful decor/lights, and move on. No big deal.

I think you are struggling with how you’ve been treated as a result of religion and commercialization, more than the holiday itself. Welcome to being a minority.

I hate all the EXPECTATION for gifts from adults and teenagers, but I don’t mind giving in general if I can afford it.

That’s the advantage of being an Artist!

I just make stuff for people and they are all too polite to point out how much it sucks because it was a hand made gift.

Saves a lot of money that way!

This will cheer you up. 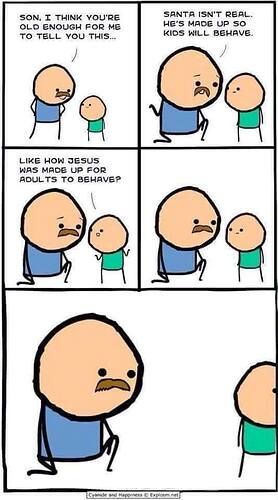 For me, Christmas is just a holiday, one to share with loved ones, reflect on stuff, and get the brain twisted. Ever since my family all agreed we would not do the gift thing, a lot of pressure has dissipated and we get to focus on what matters, each other and good times.

I do like a few christmas movies, and it gives me pleasure to see good stories about good people doing good things. 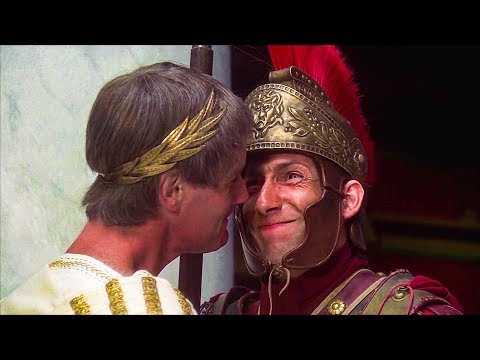 One of my favorite movies of all time, my wife won’t even be in the house if any part of this movie is on the TV. I still have my “honk if you love Brian” bumper sticker that I got at the theater when this movie came out.
My favorite part is still the “stoning” scene.

One of my favorite movies of all time, my wife won’t even be in the house if any part of this movie is on the TV.

If she hates that movie. Then you should put Spawn on. 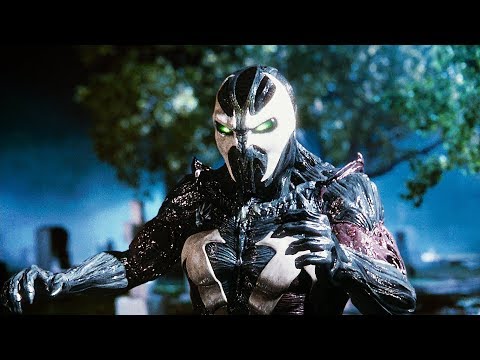