How the fuck is Authoritarianism better? 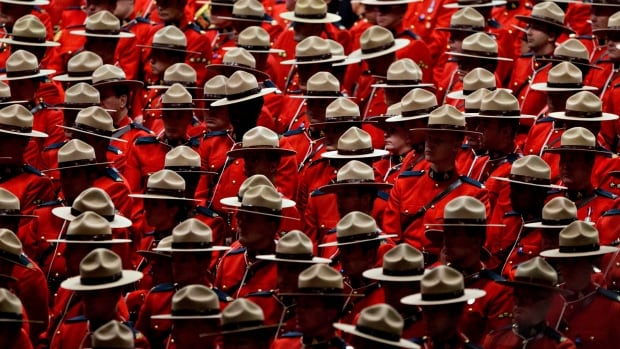 Current example in a democratic society where Courts can move a citizens’ complaint forward to be determined.

Media plays a role as does the courage of the complainants and the “separation” of powers.

The neglect of the RCMP to address this early on demonstrates the ongoing ability of any “organization” to cover its own ass before the public or individual “good”.

SO to my topic…the call for OR “positive examples” of (regardless of political ideology) Authoritarianism just drops my jaw!

China and Russia come to mind as big players in this type of rulership, and somehow have a following (Russia, the far-right; China, the far-left) and these countries vomit out their propaganda that is eaten as a regular diet for some.

IF a “democratic, free-press” country needs to keep an eye

on organizational human-rights issues and illegal activities and advertise it (via media) - yes, it may take decades to resolve - HOW MUCH SHIT and SEWAGE is below the thin top layer of “water” in these countries?

that is the appeal to those that lean towards authoritarian type governments…it perpetuates a fantasy and keeps the “skeletons in the closet”.

Dwyer says that the team didn’t see anything during its visits to suggest a lab accident. “Now, whether we were shown everything? You can never know. The group wasn’t designed to go and do a forensic examination of lab practice.”
https://www.nature.com/articles/d41586-021-00375-7 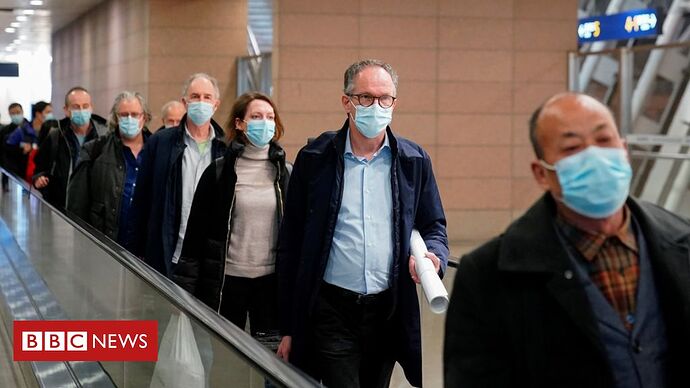 Covid-19 pandemic: China 'refused to give data' to WHO team

A member of the team accuses China of withholding full data on the early days of the outbreak. 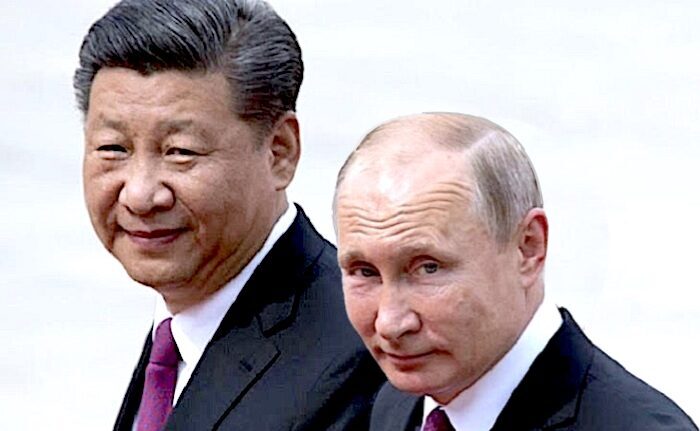 America loves its superhero films, but fiction is fast transforming into fact as China and Russia aspire to lead a real-life Justice League. The comic book series and film of the same name refers to a collection of superheroes who save the world...

To agree with you generally, I don’t authoritarianism is the right approach to modernity. It benefits a few powerful people at the expense of the vast majority of society. That’s where authoritarianism gets us. It leads to surveillance states and brutal oppression, or at least has recently.

I think the appeal is that you can’t really stop a state like that once it’s formed, so resistance is nearly futile. Why fight if you reasonably know you won’t win? Better to sit back and let daddy-Xi and mommy-Peng make decisions for you. It’s a form of religion as far as I’m concerned. State worship.

It benefits a few powerful people at the expense of the vast majority of society.

I fully agree on that gold-plated statement.

Why fight if you reasonably know you won’t win?

In each of those countries, revolution was fomented by pissed off bourgeois intellectuals . They in turn encouraged we the people who are sheep. The grass roots revolution is myth.

No system lasts indefinitely. The PRC regime will fall, Putin will die, as will the nasty little fat cunt in North Korea. (an obscenity to be fat when your people are starving)

One of my favourite poems is Shelley’s Ozymandias, written about Ramses the great. (he who Jews claim was the pharaoh of the exodus):

met a traveller from an antique land,

Who said—“Two vast and trunkless legs of stone

Half sunk a shattered visage lies, whose frown,

And wrinkled lip, and sneer of cold command,

Tell that its sculptor well those passions read

Which yet survive, stamped on these lifeless things,

The hand that mocked them, and the heart that fed;

And on the pedestal, these words appear:

My name is Ozymandias, King of Kings;

Look on my Works, ye Mighty, and despair!

Nothing beside remains. Round the decay

Of that colossal Wreck, boundless and bare

The lone and level sands stretch far away.”

It benefits a few powerful people at the expense of the vast majority of society.

Hey man, we’re totally on the same page with capitalism. I thought we were just talking about authoritarian regimes. The US is a financial oligarchy, that’s a quote from Che Guevara, and people suffer here too. We just get some choice over who leads us.

Yet just about every human organization is authoritarian, including families, sports teams, business corporations, and of course schools. Is that because most people feel more comfortable being told what to do?

Just as the “solid” Earth on which we stand is just a thin eggshell over a ball of lava, perhaps authoritarianism itself is the illusory veneer that we create to cover up the seething mass of chaos in which we live.

A choice selected by the corporations.

HOWEVER my point was, a natural instinct to “hide” or “reduce accountability” in organizations, and when it surfaces in more democratic countries - I wonder, Jesus fuckin’Christ HOW bad is it when it’s happening in countries that have full control over all areas.

Media, courts, policing, education, etc. Religion too. It’s not like the Catholic Church or JWs put the care of the kids first. NOPE covering their asses for their fucked up priests and elders.

The US is a financial oligarchy, that’s a quote from Che Guevara,

Perhaps not the best source to cite. Che was a committed Leninist and committed to violent revolution. His opinion might be slightly biased.

Me? Pluralist within the meaning which says capitalism is probably the most equitable form of economic system currently available to us. Also within the meaning that I eschew political ideologies in favour of pragmatism. Using any method which works. Don’t think I can claim my position is an especially moral one.

I’m a bit of a Leninist myself, fair warning. I think Che had the right idea to be completely honest.

Am I arguing for a violent revolution? No, I think we should try a peaceful one first. But if peace fails, the solution may be violence. That’s an unfortunate reality of financial oppression in the United States and elsewhere.

I think Che had the right idea to be completely honest.

The theory of power which I accept as the most realistic is called conflict theory, as opposed to a consensus model which we tend to kind of accept…

Mao said “power grows from the power of a gun”. I think He was right. It is my opinion that there is [at least] an implicit threat of violence behind all real power.

100% with you. A state is a form of power, and the state enforces that power by means of weapons, surveillance, police, etc. States aren’t particularly benevolent, they only act and talk like they are. That doesn’t mean they can’t do good things. It means they’re necessarily coercive, and often that coercive power is turned towards the weakest and most vulnerable.

It means they’re necessarily coercive, and often that coercive power is turned towards the weakest and most vulnerable.

“Necessarily coercive” has a benign ring to it . A text book example here was conscription which was introduced solely to send kids to the Vietnam War to support the US. Refuse the draft, go to prison. I went into the army for two years. Being a political prisoner would coloured the rest of my life, and not in a good way.

The day governments everywhere become only necessarily coercive is the day no revolutions will be needed .

I was a unionist all of my working life. Today, the trade Union movement is a shadow of its former self in Australia. In many occupations that’s because workers have been conned into believing unions are now redundant.

Doesn’t work in all occupations. I was gratified to see that AMAZON will soon have its first unionised Warehouse. I buy a lot of stuff online, it’s a hobby. I do not buy anything from Amazon because I have never like the way they treat their workers…

I don’t mean necessarily coercive to sound benign. Philosophically, I have a problem with states even existing. I’ve identified as an anarchist and probably still do, not the kind who smash storefront windows and riot but someone who sees coercion as unethical, immoral, whatever word you want to use. A state is coercive, therefore a state should not exist. A state is oppression made manifest.

So are parents. Coercive.

A State is also a form of organization. Exactly how would science, education, public works, finance, trade, laws, business/corporations, etc. operate under Anarchy?

Maybe they wouldn’t, that’s the point. We would live more primally. Scavenge, hunt, grow. We would be happier like that. Roam around, sleep where we want, eat and drink and be merry.

Most of what you mentioned as the apparent benefits of the state are in fact mechanisms for redistribution of resources. They make the rich richer and the poor poorer. That’s what all of those things do.

We would live more primally. Scavenge, hunt, grow. We would be happier like that. Roam around, sleep where we want, eat and drink and be merry.

Hahahaha… holy fuck! YOU obviously have never done anything close to what you suggest and have somehow romanticized in your head.

Pffffh. I firmly believe we would be happier living like the primates we are.

Pffffh. I firmly believe we would be happier living like the primates we are.

Next time you have a fire, need a cop, or require a hospital visit, remember those words.

We are a social species and require others to survive. In a working democracy we operate under a consensus. I may be pissed at an election outcome, but I have to accept the results. And work harder for the next election cycle.

Is it the 1st where you live??? It’s the second here, but I have a feeeelllllliiiinggggg you are being funny

This has nothing to do with the election. I’m glad Biden won. That doesn’t mean I don’t have issues philosophically with the existence of governments.