How the fuck is Authoritarianism better?

@JoelInbody I’m OK with that.

But you live in a nation where you do not have a free and open democracy. Whitefire began this thread explaining that up here in Canada, such scandals by politicians or their surrogates (the RCMP) are held accountable by the public.

I suspect you do not share the same belief with your own politicians and political system.

I’m not a big fan of the US. Could it be worse? Yeah, it could. Could it be better? Yeah, a lot better. Politicians talk a big game here about freedom and justice for all and shit like that but they either don’t mean it or it never happens. There’s a lot of poverty and inequality in the US that should be addressed.

The way I see it: anarchy would be better, but I have to accept the circumstances I was born into. I can’t pretend I’m not in a state, so the best thing to do is try to improve how the state functions, making sure it benefits everyone. It doesn’t, of course, and a lot of that comes down to the fact that most politicians are wealthy.

I agree that ideally, the best form of government is no government. Realistically, I’m an urbanite, a happy consumer and love my creature comforts.

Australian aboriginal society is anarchic and is the oldest society on earth, at not less than 50, 000 years.

American plains Indians were also anarchic, with no formal government. Anarchic doesn’t mean chaotic or unorganised or without laws, or spiritual beliefs.
Such societies often have very rich internal lives, with sophisticated myths and legends and keen sense of justice. What they do not have the kind of diversity found in an industrial society.

Imo the problem with the concept of an anarchic society is that it only seems to work with relatively small groups, with a relatively simple division of labour. It cannot work in a society of the size and technical sophistication of ours as far as I can tell…

My idea of sleeping under the stars is five stars. Did a lot of very basic jungle camping in the army. Even did a survival course in the Malay jungle, where food is relatively plentiful and water easy to get. Fucking hated the whole experience…

A minor drawback of living in a simple anarchic society is that you are well and truly dead before the age of 40. Are such people happy? I have no idea, looks like an unending grind to me. I have no way of knowing.

What then is the measure of a successful society? Longevity of that society? Material well being? Human happiness? There’s the rub. What’s better, a short happy life, or a long miserable life, or something else. Seems to be that for the ordinary person, life is very much concerned with compromise.

But he also wrote " “if one advances confidently in the direction of his dreams, and endeavors to live the life which he has imagined, he will meet with a success unexpected in common hours.”’

I lean towards the first quote, but suspect that there is no single truth by which all human beings maybe assessed, apart from the fact that we die.

The way I see it: anarchy would be better, but I have to accept the circumstances I was born into. I can’t pretend I’m not in a state, so the best thing to do is try to improve how the state functions, making sure it benefits everyone. It doesn’t, of course, and a lot of that comes down to the fact that most politicians are wealthy.

As a Canadian we share a common culture with the US. But obviously, we do things a little different. One major benefit (IMO) we enjoy is a multi-party system. It keeps the parties in check and doe snot allow two to control the entire political game. I am not a fan of either the Democrats or Republicans, both have lost their way.

IMO I see politics being handled as just one of two options in the US, with the pretense of freedom but the reality of being allowed to choose only one of two. There is no third, or more options. And I firmly believe a multi party system is beneficial to the average Joe, any political parties that stray out of bounds just get wiped out in the next election cycle. I mean, they lost so many seats the party basically folded and had to re-invent itself.

There are more than just one of two extremes, more than accepting a corrupt government or going full anarchist.

any political parties that stray out of bounds just get wiped out in the next election cycle.

As Happened in Western Australia just last month. The official Conservative opposition got wiped out to the extent it has only two seats. Its coalition Partner has 5…and as such for the first time since WW2 is the National Party are the Official opposition and reveling in it.

The Libs had espoused open borders during the pandemic, opposed masks, no economic stimulus, all the usual ignorant shite that reactionary tory wannabes pissed and moaned about in the US…and they got a paddlin’, now they are whinging because they dont get any “special privileges” by being the Offficial Opposition…tears are running down me trouserlegs as I write.

There’s value in what you’re suggesting. If we’re going to have a state in the United States, I would prefer we get more options because the only options we seem to have are conservative light and conservative extreme. The war machine in this country is bloated and immense. So much of our budget is wasted like that.

Which pains me greatly because I have great respect and adoration for so many of my friends and neighbors south of our border. Not that we are perfect and have our hands clean either. But our problems look pale compared to some of the issues in the US.

FYI I was named after Dwight David Eisenhower.

IMO both the Democrats and Republicans have shut out any outsiders, the end result is the USA is just a two party system, a closed club. Any attempts by any third party is vigorously opposed by both parties, they know that as long as they keep it just two parties they take turns sharing power.

In 1988 Brian Mulroney was re-elected as our Canadian Prime Minister, with an overwhelming majority, and the Conservatives had 211 of 295 possible seats. But five years later, due to Mulroney and his cronies making a lot of bad errors, that same party crashed and burned, winning just 2 seats.

That is how politics should work. You screw up, the voters should be able to toss you into the dumpster.

Am I arguing for a violent revolution? No, I think we should try a peaceful one first. But if peace fails, the solution may be violence. That’s an unfortunate reality of financial oppression in the United States and elsewhere.

This is a false dichotomy fallacy writ large. Violence may be a force for change when all else has failed, but as a solution it’s generally self defeating.

Capitalism is unsustainable - it will end (as we know it). Actually MATERIALISM is pretty juvenile. We must invest in our health as a society and we must still allow clever and motivated people to be rewarded (with limits). Duality is the law of the Gods. We gotta recognize that it’s not Right or Left totally - it’s a proper balance.

Duality is the law of the Gods.

I absolutely reject this assertion. unless of course - sigh …you have demonstrable evidence of gods/deities - ohhh

and some evidences that these “laws” belong to “them”.

Your argument is no different than the god’s “laws” that have shaped human societies today (and throughout history).

Ok, aside from the gods assertion - don’t you think the true answer is somewhere between pure materialism and communism?

Maybe the best course of action is to ignore following dogma which had led to tragic consequences and just find the best solutions to problems.

don’t you think the true answer is somewhere between pure materialism and communism?

Any model that has materialism and communism on the same axis is pretty strange, imo.

as will the nasty little fat cunt in North Korea.

Either his sister will take over or China will put someone else in charge when Kim Jong Un passes away. Everyone celebrated when his dad died online. There were funny videos like this on Youtube.

Indeed, but then since everything we understand is finite I’m not sure this tells us much.

I think it has its roots in evolutionary instinct. Greed has been advantageous to survival, post agricultural and industrial revolution, well it’s becoming problematic.

We must invest in our health as a society and we must still allow clever and motivated people to be rewarded (with limits).

The worlds population has more than doubled since I was born, I think the problem for once is self evident.

We gotta recognize that it’s not Right or Left totally - it’s a proper balance.

Who sets the limits? Please don’t say “the people”. “The people” always ends up meaning Stalin, Mao, or Kim.

Will the clever people still be motivated within those limits?

Capitalism is unsustainable - it will end (as we know it)

That’s a shame. Since the Industrial Revolution capitalism has produced the biggest advances in technology, well-being, health, longevity, and prosperity in human history. Since the turn of the century it’s lifted billions above the poverty level. But I guess we don’t need any more progress.

BTW, which capitalist corporation made the device on which you typed your message?

we must still allow clever and motivated people to be rewarded (with limits).

I think we must recognise the inherent value in a single human life. I’ve nothing against being clever, it beats the alternative, but I think ensuring nobody lives in want of necessity is a better base line for any decent society.

At one time, being able to afford to be in the highest tax bracket was itself a status symbol. Their needs, wants, lifestyle were met AND they enjoyed the social “contributions” to the less fortunate.

The wants have grown to ridiculous. The show of wealth is disgusting

Define “capitalism”… it’s already morphed and in many ways, rightly so - the regular folks are just catching on that the government funds are actually meant for them (their well-being)…

Ok, aside from the gods assertion - don’t you think the true answer is somewhere between pure materialism and communism?

What an odd thing to say. From whence did you get the impression that Communism is other than materialist in its world view? Don’t tell, me you’ve never bothered to read The Manifesto or Capital…

My view? I’m nota fantasist. So far I’ve never come across a perfect political or economic system. Not convinced there is such an animal.

Right now I’m perfectly happy being a dedicated consumer and Capitalist. Of course capitalism will collapse eventually. (really do suggest you read Marx)
However, I’m reasonably confident this will not happen before I die.

Not as confident about climate change. Just this week David Attenborough opined that we will be facing catastrophic consequences within the next 5 to ten years. I was hoping To die before climate change became a significant personal inconvenience. 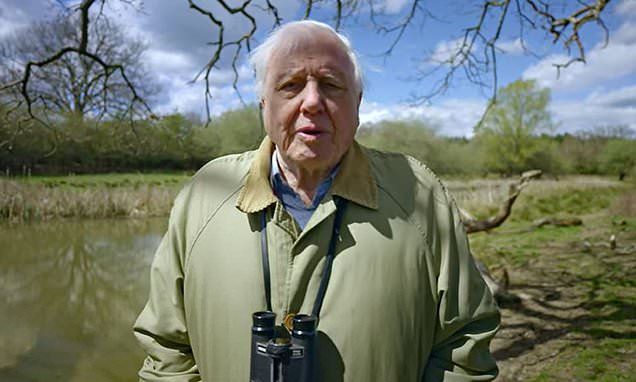 Sir David Attenborough has warned the world faces 'crippling problems' because of climate change after being given a role as the People's Advocate at this year's Cop26 summit in Glasgow.