I know what I said, but I can’t help myself.

Our little friend said, and I quote “I am an historian”. So far , all I’ve seen demonstrated is an autodidact who has a poor teacher. IMO, If our friend has indeed attended university and has been given a degree in history, he /she/it should ask for a refund.

The claim about the dead sea scrolls was a bit of a howler. I guess I should be charitable and allow the possibility that he got The Dead Sea Scrolls and The Nag Hamadi texts confused, easy enough to do for a non professional, I’ve done it myself.

Oh, I had only a year at University in [modern] history. Over the last 25 years, I’ve read only non fiction (history). Last five years I’ve concentrated on Biblical History with the odd foray into ancient Egypt. Yet I remain a relatively ignorant person and am unable to call myself an historian.

The claims about The Book of Genesis show vividly that this person knows little or nothing about fairly basic science or evolution*** . The claim about the Old Testament having information about dinosaurs was pretty funny.

I think focusing on claims about things the bible gets right may be an example of confirmation bias . IE One simply ignores all the errors, focusing only on things which are right.****

Learning about history is a wonderful thing and great fun. However, if one wants to discuss such leaning with others, one should perhaps learn the basics of critical thinking (Especially when one’s audience clearly knows more than oneself) and still check one’s facts.

Twerps such as “God Is real” want the name without the actual study and consistent effort demanded of the scholar. It crumbles my cookies…

***On claims of biblical inerrancy, I recommend “Misquoting Jesus” I think professor Ehrman was still a conservative christian when he wrote it. (or he was when he began) 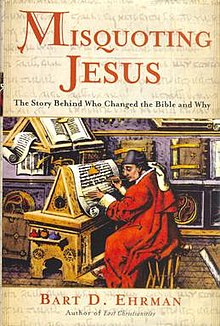 Misquoting Jesus: The Story Behind Who Changed the Bible and Why (published as Whose Word Is It? in United Kingdom) is a book by Bart D. Ehrman, a New Testament scholar at University of North Carolina at Chapel Hill. The book introduces lay readers to the field of textual criticism of the Bible. Ehrman discusses a number of textual variants that resulted from intentional or accidental manuscript changes during the scriptorium era. The book made it to The New York Times Best Seller List. Ehrman r...

It is unfortunate that when someone like myself, barely knowledgeable compared to others, suggests that one learn the history of the bible and it’s contents.

It’s all relative mate. Most who come here are atypical, even the apologists. In their case, not in a good way.

I think we all do pretty well compared with hoi poloi***

***In case you’ve ever wondered, the literal meaning is ‘the many’. I always thought it meant “the great unwashed”. I think that has a lovely elitist flavour.

I always thought it meant “the great unwashed”. I think that has a lovely elitist flavour.

Well, depending on when it emerged in language “the great unwashed would have been the masses”.

Mind you, the elite did the same just covered the BO and bugs with powders and wigs

I’ve lost count of the known logical fallacies he’s used. Basically we have yet another theist who either doesn’t know what rational means, or is using it as a rhetorical soundbite, in the mistaken belief such sophistry lends credence to his claim.

As you say he doesn’t appear to have even the most basic grasp of science, while the biblical myths he’s trying to claim are scientifically correct, are being interpreted so subjectively, they could be claimed to be a secret recipe for ratatouille.

Historian indeed, all I’ll say there is I’m dubious. Though the best biblical historians have failed to reveal anything that could remotely be called objective evidence for any deity.

Isn’t that the truth! I am forever stumbling across shit I didn’t previously know. Even after reading a chapter or a story. I actually get a kick out of Sheldon, Boomer, White, You or anyone else on the site saying something that I just know is wrong, sending me off to the books, only to discover “What the fuck have I been thinking and where in the fuck did I ever come up with the idea that I had?”

A whole lot of stuff that people come up with is from disciplins about which I know nothing. Especially mathmatics. I like the discussions but can’t keep up. Some of the philosophical stuff gets my attention but if I am not in the right time zone, I get left behind. I wake up in the morning and 40 posts popped up while I was sleeping. The thread is so twisted that I can no longer follow it. Still, it’s all fun and games and it is all entertainment and much more productive than mindlessly watching TV. I also prefer it to playing most video games. So here I am and it is all because of YOU.,

s you say he doesn’t appear to have even the most basic grasp of science, while the biblical myths he’s trying to claim are scientifically correct, are being interpreted so subjectively, they could be claimed to be a secret recipe for ratatouille.

One hours notice is required if you are going to write humour like that Shelley. Captain cat is wearing most of my afternoon cake and a large portion of nasally sprayed Orange Pekoe.

He is not pleased.

I am not in the right time zone, I get left behind. I wake up in the morning and 40 posts popped up while I was sleeping

I know what you mean, it happens to me as well. I find myself posting in response to discussions that have run their course more or less.

Though the best biblical historians have failed to reveal anything that could remotely be called objective evidence for any deity.

Good point. Although there are exceptions, such as Bart Ehrman, who was a believer until quite recently.

Yea, so pretty until you see the claws.

The longest I sleep is two hours at time. It’s been like that for about 45 years. My doctor said it has something to do with when I was a practicing alcoholic. However, I usually have plenty of energy and remain capable of performing quite complex tasks

I totally agree a creator is not incompatible with belief in evolution and science. The reason I side with atheists is because the Abrahamic/Biblical god is anti-science and anti-progress!

a creator is not incompatible with belief in evolution

This has already been debunked. A creator is “COMPLETELY COMPATABLE WITH EVERYTHING.” It is the fucking creator. It is a non-falsifiable claim. The assertion that the universe was created is every bit as valid as the assertion of something beyond space and time. “How in the fuck could anyone possibly know?” All anyone is doing is making a “Completely Blind” stab in the dark, based on some set of unfounded essoteric beliefs or feeligns they profess to have. It’s fucking ludicrous.

I totally agree a creator is not incompatible with belief in evolution and science.

By now I think I can guess the answer, but will you be demonstrating any objective evidence to support the claim with which you are parotting agreement?

Since nothing in any of that evidence requires or indicates a creator. What can you demonstrate for the additional deity creator you’re trying to tack onto it?

The reason I side with atheists is because the Abrahamic/Biblical god is anti-science and anti-progress!

What side???
For the umpteeth time, the only thing atheists have in common is a disbelief in gods/deities. Including yours.

There has been no demonstrable evidence of its existence. The writings you refer to are by humans describing their world and attributing it to “god”. They are the writing of Bronze Age to Iron Age peoples.

The followers of these writings (that they choose) are not necessarily “anti-science or progress”. Again, science is filled with people who follow the scientific method to advance science and progress.

You narrow your view for the other YET have resisted defining your “paganism” (wanting vast latitudes).

You narrow your view for the other YET have resisted defining your “paganism” (wanting vast latitudes).

He seems to think he can sneer at the superstition of others without ever bothering to justify his own.

His relentless unevidenced assertions, are as tedious as the obsequious way he keeps trying to ingratiate his spiel with atheism, as if we haven’t noticed they are mutually exclusive positions.

He seems to think he can sneer at the superstition of others without ever bothering to justify his own.

Well, strictly speaking… if we ignore the rest of the context here, this is actually OK to do, provided he argues against superstition S using scientific results of empirical (E) and theoretical (T) type using sound reasoning R, so that R(E, T) shows S to be false. This is independent of whether he holds other superstitious beliefs S(1), S(2), …, S(n) or not, and whether those can be shown to be false using the same type of process or not. Whether it is good form or not is an entirely different matter.