Do you always admit your Atheism?

Does anyone have any instances in daily life that you would hide that you’re an atheist?
Do you ever just stay silent if it comes up, and if so, for what reasons?
i.e. funerals, weddings, work?
Have you ever pretended to be a Christian(or any other religion)because of perceived or real danger?
Do you ever lie on forms, such as hospital admissions for fear of different treatment from a theist staff?
Perhaps you just don’t want to argue with someone or fear retribution?

I always leave any form that request my religion blank. It is the most accurate answer.

Yes I have felyt in fear of my life in a religious context. Once in the US and once in India.

If ever asked outright I just say I’m non-religious.

My community is religious, rural based Alberta. Not really fundie, and there’s a good mix of religions, but non-religious covers it. Most here know my background so chalk it up to that.

Normally, religion is just a non-issue to me, and I don’t think about it or talk about it. But if the issue is touched upon in a conversation, I clearly mark that I’m not religious. I mark my distance from religion with utterances ranging from “that’s not quite my cup of tea” to “gods do not exist”, depending on context and how much I want to provoke a reaction (or to scare away street preachers when I’m not in the mood for chit-chat). Although I have never needed to pretend to believe, I might not always give away my position when not needed. Saying you’re an atheist is non-problematic here.

In situations where tact and respect is required, e.g. weddings and funerals, I just go with the flow without saying anything or protesting, but I don’t actively pray or sing hymns or whatever rituals they perform. Instead, I just keep my mouth shut. And I actively try to avoid the subject, out of respect to the main subjects of the occasion.

No fear here in Canada, but I do not advertise it. At my mother’s funeral I just kept my yap shut and went with the flow.

Socially, it is no one’s business. It would be as rude of me to walk into a room and announce “Hi everyone, I am an atheist.” as it is for the asshole in the corner to keep shouting, “Praise the Lord” or “Thank you Jesus.” These assholes have just gotten away with it for so long that they precieve no wrong in their actions. Times are changing. It is still rude for me to just blurt out my personal beliefs for no good reason in a social situation, but now, it is just as rude for the theists to blurt out there nonsense and when they do they are likely to be challenged on it. I would certainly say something to remind them not everyone is a believer. “Praise the Lord” “Yea, for Covid 19 and the death of small Children!” I would not be able to let it go.

I have a friend I work with. We work with small kids. He is devout Christian. He complains about the kids behavior. They have no manners… etc… My response… “Evidence for evolution! After all, they are all just little monkeys!”

I do not advertise it, but I won’t lie if asked. I have zero interest in a discussion about it. As far as the HMO I belong to, I’m still listed as Roman Catholic, because that’s what I put down in '84. I’ve only been approached once (with a communion wafer) when I was in the hospital ('96), but I’d had abdominal surgery and eating anything was out of the question, in any event.

At weddings and funerals, I don’t mention it, of course.

Is this what it would look like if atheists went door knocking? 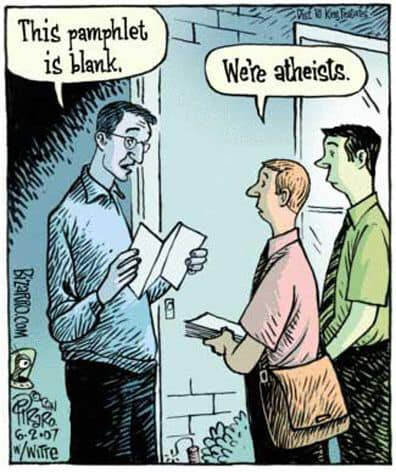 In my younger days I wouldn’t admit it, mainly not wanting to be the odd one out. Now if someone tries to pull me into a religious discussion or I get an invite to church etc. I will fess up

There’s enough misconceptions that atheist are “hiding” among them or aren’t decent people.
I’d recently thought a bully at work might be targeting me because of being an atheist, but then I realized she’s just a b*tch

. Just twisting everything I say and finding fault with everything I do (including where I was standing the other day). Then I found out that another person she seems to go after like a duck on a june bug was someone I know to be devoutly religious. She’s pretty devious and doesn’t really do it in front of others so I thought it was just me and I guess I jumped to conclusions. I’m glad it doesn’t seem to have anything to do with religion.

I honestly can’t remember the last time anyone asked me.

My immediate and extended family are aware and my closest friend is also atheist. We often amuse ourselves by discussing the latest religious idiocy or scandal. Yes, I know that’s very intolerant. What can I say? I’m a grumpy old man. I have two T shirts saying so.

To answer the question hypothetically: It would depend. I’m very wary of ascribing absolutes to any of my behaviours.

Interesting. I feel that I am asked frequently. In polite company I simply mention that I do not believe in Gods, supersition or magic. That is generally as far as it goes. I almost always pair the god idea with magic, and supersitition. I see no distinction.

I almost always pair the god idea with magic, and supersitition.

Being moderately educated on some of the sciences, I ask myself “if a god does not use “magic”, then what mechanisms does this god use to read dreams, or perform miracles (for example)”?

If not “magic”, does this “god” have a parabolic dish the diameter of a galaxy to read my brainwaves in order to discern my dreams? Any explanation using the known sciences always comes up flat.

Therefore this proposition falls into the category of “I am not convinced”.

For me, I never speak of my beliefs, or rather, non-beliefs, unless asked. They are my private business.

I do the same with others as well - both religious believers, atheists, etc… If I want to know, I just ask, otherwise, I mind my own business. I do this out of respect for myself and the other person.

I’m very open that I’m an Atheist and I don’t believe in Gods or practice a religion. I’ve gotten criticism for it from people I know who are Christian. My family doesn’t care that I’m an Atheist. It’s been talked about a few times with them and I’ve had some really ugly debates with my mother about it in the past.

I’ve hid it but I usually don’t. I was at a birthday party at a church the other day and someone asked me where I went to church. When I said, “I keep to myself,” they pressed me and said, “Does that mean you don’t have a church?” I said, “Yes.” I thought about saying “…because I’m an atheist,” but I decided not to. It wouldn’t have helped anything.

As an adult, I’ve had the luxury of being able to get away with openly being an atheist.

I think I’ve only lied about it a few times; when I was extremely vulnerable.

It’s pretty obvious that I’m not a “believer” by my appearance, and my family and friends know that I’m an atheist, so the subject rarely comes up. On the rare occurrence that my wife and I run into some of her friends from church and they wonder why they’ve never seen me before, my wife simply says “he’s not a believer”. If it were up to me, I’d say that I’m too old for fairy tales and don’t believe any of their bullshit.

On the rare occurrence that my wife and I run into some of her friends from church and they wonder why they’ve never seen me before, my wife simply says “he’s not a believer”. If it were up to me, I’d say that I’m too old for fairy tales and don’t believe any of their bullshit.

My ex wife was Christian. She hated that I was Atheist. Really wanted me to believe in it. However in 11 years we divorced because she cheated on me multiple times, she wanted a divorce, and I never cheated on her once. I was tempted by other women through those years but I never did anything. She told the kids that I cheated on her when we lived in Florida because she found lip stick in my jacket pocket. She brought it up again to them when they visited her and her mom. I really believe she’s making that up as to cause problems.

@MrDawn She is Christian, and yet, she violated the 7th Commandment:

“Though shall not commit adultery”.

Oopsies! Guess she is not going to have a good Judgement Day, when she meets her Maker.

She is Christian, and yet, she violated the 7th Commandment:

Mine or her beliefs wasn’t a big part of the marriage. We never really discussed religion. She says she believed in god. But I don’t think she was very committed in her relationship with that religion. There were times when I went to church with her to make make her happy because I wanted my marriage with her to work. So I put out and effort. Sat through the gospel band and listening to the pastor or reverend drone on and on about some bs book out of the bible.

Mostly we didn’t go to church that often. Because I hated going and she didn’t get along with some of the people there. I had a valid excuse, because I didn’t believe in it, and she made excuses not to go. The only reason why I tagged along was because I had marital problems and I didn’t want her to leave. Sadly, the marriage failed anyway.

and if she marries another man

I honestly don’t think she’ll get married again. She’s stuck on meth right now. My family and her family thinks if she OD’s one too many times like she has been, she’ll die eventually.

I kind of feel like my marriage was a sad story. Her family hardly helps her and she was basically homeless and living out of her car when we got together. So I was always there for her, in the 11 years we had.

In one way, I still care about her because it was her who left me. When she and I got together she was sweet that it made me want her.

But then I feel anger from all the times she cheated on me; the first time she cheated on me 2 months after the marriage with a guy she hung out with in high school then again with another man 10 years later and then more after, she constantly lied, Blew my paychecks, she doesn’t believe in forgiving me as she held everything I ever did to her over the 11 years against me; she hasn’t forgiven me for one damn thing, not respecting my wishes to keep her sister out of our home; because her sister was a violent drug addict and a sociopath who was associating with criminals, the list goes on.