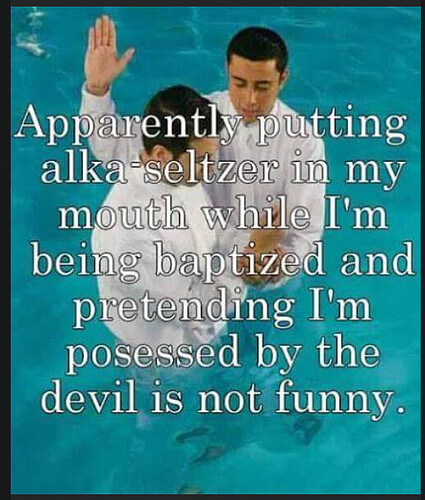 Not many infants have the foresight to do that.

Apropos of the topic heading, accidently came across this yesterday. I forgot to be a cynic for 5 minutes.: (the child’s father had recently died) 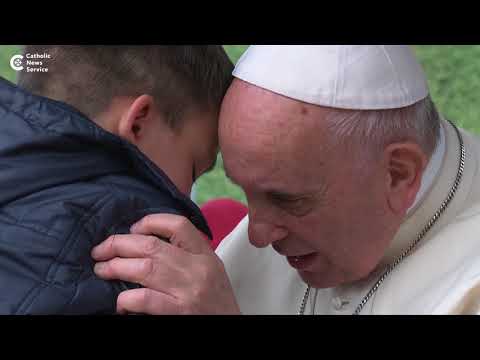 I can’t even look at a priest anymore with anything but cynicism. At the very least men that age and that high up in the church had to have been directly involved with shielding pedophiles. Seeing a vulnerable little boy with those priest makes me cringe. Geez, I can’t even watch the show “Father Brown” about a crime solving priest. A friend recommended it to me but all I could think was “I’ve got a crime you can solve. It’s horrendous and it involves your colleagues and children.”

OMG>>>>> Funny as hell! I want to go and get baptized just so I can give it a try. Anyone want to hold the camera? Why in the hell didn’t I think of that!!!

I can’t even look at a priest anymore with anything but cynicism.

How very sad, not to mention bigoted. I’m unaware of any evidence which supports such an extreme opinion. .

I can. I guess it’s because I was raised devout Catholic and new dozens of priests over many years. That includes Leonard Faulkner, who gave me my first communion, and ended up Archbishop of Adelaide, I decent and sincere man. He came out of retirement to say Requiem Mass at my father’s funeral. Poor old fella kept getting confused.

Of course I’ve known more than few priests who were dickheads, just like in life generally.

I honestly do not know any priests but I see a priest and I immediately think “con man.” I just consider them the lowest of the lowlifes on the planet. They are the vultures hovering over hospital beds hoping to be included in the wills of the dying. The are the assholes with the silver and gold gilded cups, convincing the rich to buy their way into heaven by giving to the poor through the church instead of directly. They are the assholes with the biggest and most expensive buildings in any city, all paid for by the starving urchins sleeping in the doorways. Oh… I’m not saying those poor urchins are the ones actually giving the church all that money, even though they do give the church every last penny they beg. The church uses them like little guilt tokens to flag under the noses of the rich to garner tithes and donations. One good picture of a sick kid with a bowl of rice or a new soccer ball is worth about twenty million dollars. FUCK THE CHURCH!!!

Lucky you finding sane priests. I haven’t seen any in over 20 years. I just get the sadistic penis worshippers who threaten you if you don’t acknowledge their penises of the source of all sanctity and the font of all wisdom. I’ve learned you BETTER not question the right of a priest to rape a child if you know what’s good for you.

I guess being raised a devout Catholic didn’t work for you.

If only I could re-do my JW full water baptism.

God is not a humanist. That’s clear from his man-written books and inability (no evidence for existing in the first place).

Faith (or confidence) in humanity is lacking??? Why? It’s humans fixing you in hospitals

NOT god; it’s humans looking out for humans (disaster relief, human rights, courts, governments, etc). We humans are mostly doing the best we can for each other with our evolved brains …

Picking only our species’ subjective negatives and overlooking the positives in favor of an imaginary emotional blankey?

I’m unaware of any evidence which supports such an extreme opinion. .

I asked for actual evidence, not a snide strawman.

Cranks… I see priests in the same light you see door-knockers (of the JW persuasion)… can’t fuckin’ stand them.

I’ll give you the response of my ‘kindly’ priest. “that Wonderful Man!” & BTW - the vatican ‘legalized’ pedophilia.

I was a 3-4 X/week,50 year plus, cradle Roman Catholic watching the pedophile crisis in horror, especially when the previous entity in possession of the vatican compared women who want to be priests to pedophiles. Then the PA bishops ordered all the priests to blatantly lie about PA Bill 1947 which extended the statute of limitations on pedophiles. I complained to my local priest; who handed out the "Catholic’ League’s Essay “Women’s Moral Descent” with its theme that men have the right and moral obligation to decide which women deserve to be raped. I called my daughter at college, crying, saying that the priests were depraved morons totally dedicated to worshipping their d*cks. Her response, “Duh, Mom! I’m sorry you had to figure it out in such a painful way.

The message of the recent Vatican – show them no mercy prayer was – Be grateful we let you live when proper procedure is for the man to murder the woman with impunity.

From what I can tell, this campaign was led by Philadelphia ExArchbishop Chaput (Slap You). - Archbishop Chaput is listed as a major supporter of Bill Donahue’s ‘Catholic’ League. - Bill Donahue’s opinion was the “the Bill had only ONE purpose - To Stick it to Catholics” - implying he believes pedophilia is right exclusive to Catholics. Bill Donahue is a believer in 'Catholic astrology. Archbishop Slap You has singlehandedly done the most to jeopardize Catholic Youth and their faith. He was just chosen to go to the vatican’s Youth Sin Nod
I will NEVER set foot in a Catholic Church again because I will LITERALLY BE DAMMED IF I WORSHIP THE GREAT PENIS IN THE SKY TO WHICH YOU MUST SACRIFICE CHILDREN! And the message of the recent Vatican show them no mercy prayer can be summarized as be grateful we let you live when proper procedure is for a man to murder a woman at will.

See also – Men Explain Religion to Me. I’ll e-mail you a free copy.

The Australian canon lawyer and the sociologist published two documents. The first is a legal report entitled “Canon Law – A Systemic Factor in Child Sexual Abuse in the Catholic Church.” (Free download from National Catholic Reporter) written for the Australian government. The second is the lay version “Potiphar’s Wife.” (Buy on line for real money). I verified the information with the author of the second book and the legal firm from the movie Spotlight. A third is “Child Sexual Abuse in the Catholic Church; An Interpretive Review of the Literature and Public Inquiry Report” another free download through the Center for Global Research; School of Global, Urban and Social Studies, RMIT Both books thoroughly document how the vatican ORDERED the bishops to protect the pedophiles starting 100 years ago. They include more detail on the Pontifical Secret that Francis just abolished. The Vatican turned the CHURCH into Q’s international pedophile ring! Francis just made pedophilia a ‘crime’ in Canon Law rather than a ‘sin’ like masturbation.

Benedict’s response to the pedophilia crisis, in addition to adding “Those who habitually lack the use of reason” to the list of those who could be raped with impunity, was to invoke the greatest evil he could think of – women. It’s response to the pedophile crisis was to compare women who want to be priests with pedophiles. The mantra in the Catholic Church is that the priest “represents Christ.” So, it’s vision of Christ is a deranged predator of children holy SOLELY because ze chose a male form when entering the corporeal realm. This isn’t the Catholic Church, it is the cult of Priapus, especially when all down the line from the pope to the bishops to the local priests they decided that the bestestest response to pedophilia is Benne Dick’s standard lecture on the sanctity of the penis. You should just see their little faces light up with JOY on the subject. Per Jean Vianney, they are now ontologically endowed to be “right next to God!” They can conceive of NOTHING holier.

Seal of confession in the Catholic Church

From what I can see a priest obligation is to the church even if it allows a pedophile to go free and that priest have chosen to obey the church over the welfare of children countless number of times. You’re in a better position than I am to know what choice most priest would make. The protecting of pedophile priest in particular is extremely well documented and was a matter of church policy. Is it fair to blame every individual priest? It’s hard not to equate them with the institution they serve.

Especially with the ENTHUSIASM they show for protecting the pedophiles.

There are two main reasons for this.

I only respond to JW’s if they knock on my door. That’s because I despise proselytizers and because I have sign “DON"T KNOCK” on my door. I respond the behaviour of individuals. I do not hate any individual because he happens to be JW.

It is my position that the catholic church has been innately corrupt since the first century, getting progressively worse over the centuries as an organisation.

I am unable to support any claim that even the majority of these men are corrupt. So far I have yet to see empirical evidence demonstrating that is the case. I think the claim is probably unfalsifiable.

I know what you mean, but my cynicism is directed at claims, not people. We are evolved mammals, don’t expect too much, and it will come as a pleasant surprise when inevitably you come across the best in humanity.

I can’t pretend to like priest on an individual bases while despising the corrupt organization they’ve devoted their lives to and many of the core beliefs they teach (no reproductive rights for women). It would be the atheist equivalent of “Hate the sin but love the sinner.” I know that sentiment to be widely detested by the people it’s aimed at, gays and such, so I have to wonder how priest would feel when similar sentiments were directed at them.

You were the victim of the most successful con of all time, including myself and many atheists in here. Humanity is relatively good, it was the con men who took people’s desires to be good and perverted into a power grab.

The Catholics dominated European religion, and just like politics, the people who climbed to the top in power used that platform to amass wealth and power. And sadly, one aspect of power is that it corrupts.

Religion does not own a simple concept, “treat others as you wish to be treated”. That’s all there is to it.

@Fleeing_in_Terror You are a good person, and I am sure so are those close to you. You just held a moral line, and when you realized your church crossed it, did the right thing and turned your back on it. And you are like most of us, humanity, that we simply desire to live happy lives and not abuse our loved ones, neighbors, and community.

Humanity is still doing well, it is just lost in the media’s penchant for showing horror rather than good stories.