If space and time are unlimited, then where is there a room for some sort of Creator or Maker? If the universe is eternal and infinite (as you claim), then it would need no Creator or Maker, and hence, no “God”. Likewise, even if the universe had a beginning, what scientists refer to as the “Big Bang”, we do not know what caused the Big Bang, so to hypothesize a Creator, Maker or First Cause, which people call “God”, makes no sense. Regardless, of whether the universe is eternal or temporal…finite or infinite…created or uncreated, the “God-hypothesis” makes no sense at all, and is unintelligible.

I hope you can understand. Once again, my apologise if I’m poor in english

Great…first I need to learn Hindi, then Spanish, and now, Italian. I guess I will never learn Tibetan.

the “God-hypothesis” makes no sense at all, and is unintelligible.

Stephen Hawking writes that during the conference in question, again in chapter 8 of the book I quoted, pope John Paul 2nd declared “that it was right to study evolution after the big bang, but that we should not try to discover the secrets of the big bang itself because that was the moment of creation and therefore the very work of god” …

For what it worths, I don’t give any chance to the existence of Dio (the way we translate God in italian, Dios in spanish), Elah (ancient Aramaic, therefore Judaic), or Allah (arab’s language). There’s no any God-hyphotesis.

I give the monotheisms’s gods as many chances to exist as I give the tooth fairy, Santa Claus, or Richard Dawkins’ flying spaghetti monster. :

Great…first I need to learn Hindi, then Spanish, and now, Italian. I guess I will never learn Tibetan.

Early Modern English – the language used by William Shakespeare – is dated from around 1500. It incorporated many Renaissance-era loans from Latin and Ancient Greek, as well as borrowings from other European languages, including French, German and Dutch. Significant pronunciation changes in this period included the ongoing Great Vowel Shift, which affected the qualities of most long vowels. Modern English proper, similar in most respects to that spoken today, was in place by the late 17th century.

I’m sorry to remind you that learning my native language (or spanish, they’re so similar, or latin,) it could be more useful than indù, parsi, or arab. 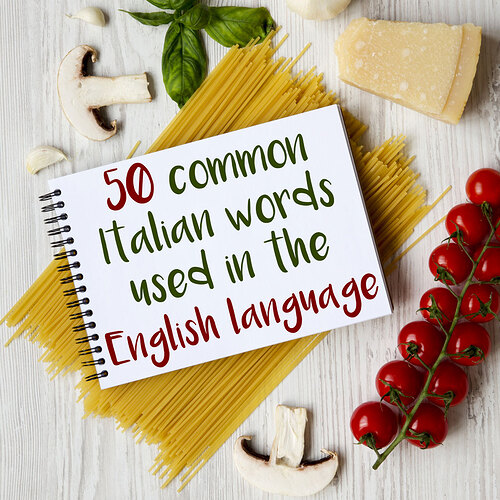 There are literally hundreds of words in the English language that sound or look similar to their Italian equivalents. This isn’t because Italian had a direct influence on English but rather because French, an extremely similar Romance language, has...

That’s a positive claim (hard atheism) and attracts the burden of proof.

Really? Even saying that the tooth fairy and santa claus exist is a positive claim.
Please, go ahead…

Do you know what sounds weird?

Even in a forum named atheists’ republic, in which those who call themselves atheists end up contesting other people who say they are equally atheists because they cannot prove that monotheisms’ gods do not exist, it happens that its members succeed in creating such divisive controversies among themselves.
Are you happy of the lasts 2000 years of Christianity? If this is the opposition to them, we will have the same for the next centuries.
I can almost hear the loud laughter reverberating in the Vatican:
"Hey, did you read atheist republic’s forum? They claim among themselves the right to define themselves atheists despite:

Every person is an agnostic

What else are you agnostic about?
The fact that science has not yet been able to prove everything does not mean that religions, which have never proved anything, can claim the right to know the truth. I don’t think it is necessary to prove the existence of a creator. If someone wants to continue to quibble with these verbal artifices about a Deus ex Machina (Deus ex Machina means “God in the works” or simply translated it means divine intervention. media it is considered a negative term and refers to an impossible situation being solved by some contrived means), that’s not my business.

Speaking as an italian man: if the Roman Catholic Apostolic Church has been pissing off for almost 2000 years, specially in my country, this is also thanks to asterile polemics such as those you are moving to me.

Even in a forum named atheists’ republic, in which those who call themselves atheists end up contesting other people who say they are equally atheists because they cannot prove that monotheisms’

That’s because we are being intellectually honest with our arguments and holding ourselves to the same standards we hold the theists, AND YOU ARE NOT.

YOU, are being an utter and complete bigoted, narcissistic, ass. You have one standard of evidence for the claims you are making, as if you are fucking special or something, and then you are holding the theist to a much higher standard for the claims of theists. IT MAKES YOU LOOK LIKE A DISHONEST FUCKING IDIOT WHO DOES NOT UNDERSTAND ATHEISM, THE BURDEN OF PROOF, LOGICAL ARGUMENTS, OR HOW TO HAVE A RATIONAL DISCOURSE.

Could I make that any more clear? The problem is “YOU.” YOU don’t know what the fuck you are doing and YOU seem to think quoting what other people say is making your point when you DON’T EVEN HAVE THE ABILITY TO UNDERSTAND WHAT THOSE OTHER PEOPLE ACTUALLY MEAN.

Are you getting any of this? YOU SOUND LIKE AN IDIOT!!! YOU DON’T KNOW WHAT YOU ARE TALKING ABOUT! YOU HAVE DOUBLE STANDARDS! YOU ARE IRRATIONAL! YOU ARE AN ATHEIST SNOB!

However, if my presence bothers you I can greet you and leave this forum.

Oh for fuck sake! Get over yourself. I think you overestimate the interest in your posts and the level of caring as to whether you remain or go.

Just for your information; all that is needed to be a member here is that one obeys the rules. There is no obligation to meet the expectations of others or that others agree with your post.

This a debate forum, some disagreement is expected and even encouraged…

I’m sorry to remind you that learning my native language (or spanish, they’re so similar, or latin,) it could be more useful than indù, parsi, or arab.

That’s not for you to say…
That depends entirely on what the goals of the person learning the language are.

You should also learn what it means to “MAKE AN ASSERTION.” and that when you 'MAKE AN ASSERTTION" you carry the 'BURDEN OF PROOF."

No one is trying to chase you off the forum. OPEN YOUR EARS! You are making unfounded claims. Go back and re-read your posts. You are talking nonsense and you don’t know it. You do not understand logical discourse.

You have one standard of evidence for the claims you are making, as if you are fucking special or something, and then you are holding the theist to a much higher standard for the claims of theists.

@Cognostic This type of arrogance or hubris amongst theists have always bothered me, as if they put themselves are being higher than others - be they other theists, or even atheists.

That’s not for you to say…
That depends entirely on what the goals of the person learning the language are.

@aketo The language of my parents and ancestors is Hindi (and Gujarati), so for me, learning the native language of my parents and ancestors is very important to me. It seems that @anon33523147 thinks that learning Italian is better or superior than learning my native language, despite the fact that I was born and brought up here in the USA. Such arrogance by @anon33523147 is unbecoming.

It actually annoys me more from atheists because I self identify as an atheist. If these guys don’t figure out how to talk about their atheism, they are like monkeys with machine guns running about thinking they are all big and bad and ready to take over the world. They are the reason I have to deal with bigoted Christians.

Such arrogance by @Pablito is unbecoming.

Indeed, yet not at all surprising in a common or garden variety presuppositional apologist.

@BigNeerav that’s very cool! In a somewhat complicated way, I am part Gujarati. Very distant though.

Every person is an agnostic

What else are you agnostic about?

I do not know the precise temperature of the exact center of our sun.

Do you? If you can not provide a number and proof, then you are an agnostic.

There is a long tradition of Popes insisting science and reason not examine their unevidenced superstition.

Sorry, I wrote a post in a very bad way.
What I meant, since we were talking about Latin languages, is that the English language derives in part also from Latin, as well as from Saxon. Knowing the Latin languages ​​can help you understand the etymology of many English words. We Latins can say the same for the Greek, which has had a profound influence on our words.

The language of your ancestors is a language that has the dignity of all the others, and you do well to be interested in it. I’m just saying that Hindi, Arabic, or Parsi have nothing in common with the English language.
I absolutely didn’t mean to offend you, and if I did, I still apologize.

There is a long tradition of Popes insisting science and reason not examine their unevidenced superstition.

Nothing has changed, it’s always the same. When the popes and the church talk about science, they do so with the aim of making themselves interesting to a wider audience. Marketing, the Catholic Church is very experienced in this.

I have no idea at all what the price of tea is in China but I imagine I can buy a cup if I happen to be holding the proper currency.

I have a growth on my first toe in from my little toe on my right foot. It has been there for three years now. I spent a year trying to have it removed. It was first diagnosed as a cyst because it had a soft center. Then it was diagnosed as a wart. Later it was diagnosed as a … I forgot… some other kind of growth. I went to 5 different doctors. One of them cut. One of them did the cryo treatments, One gave me oral medication and recommended salicylic acid. One admitted he had no idea and that it could be anything. The woman that tried to file it off with a razor blade was surprised that it caused me so much pain. ASSHOLE! I stopped going to the fucking doctors and named the fucking thing FRED.

Fred just sits there on my right foot and every month or so I have to remove a large callous like formation of skin from off the top of his head. I know it is time to remove his hat, when he begins bitching and and being a pain. Besides the occasional bitch session, I leave Fred alone and he doesn’t bother me. I have surrendered the property once known as “My right toe.” to Fred. It is now his domain and as long as he does not try to expand his territory I am content to allow him this small plot of human flesh. I don’t actually use it for much of anything and Fred does help to remind me to keep it clean.

Anyway. Back to the topic. So, not only am I Agnostic about Fred. Well, I mean… I know Fred exists but I don’t know what he is. Neither do 5 doctors. Oh… I forgot… The first doctor was going to laser him off, but once he took a look at him, decided not to. I don’t know why, (Like the lady that swallowed a fly), I never found out.

So everyone is Agnostic about Fred, and I still wish he would die.