I grew up on the rumours. Kids that didn’t come home. Every so often infant bodies would be found buried around old “nuneries”.

But now the bodies have resurfaced. Is Canadian society actually ready to hold those within their religious affiliation responsible?

Alberta - we pay our property taxes for education (district) which is Catholic school (not secular). It is so emeshed. The voting base and politicians - religious. I don’t foresee real accountability or criminal charges.

Perhaps, 100 years from now some “pope” may offer a formal apology? (No living relatives and blowing dust off their record of real crime). 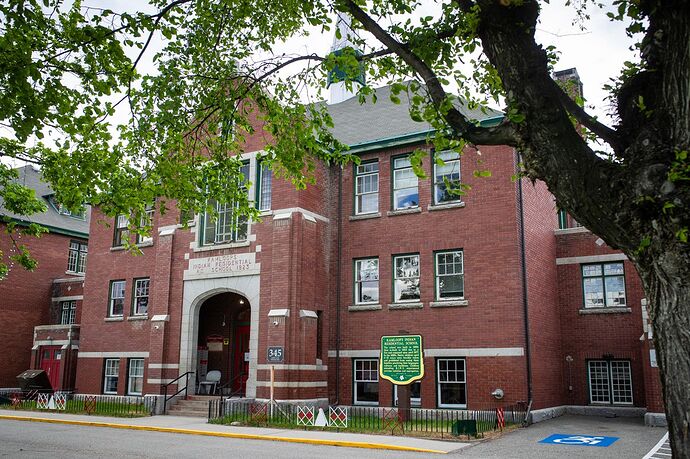 The stories of more than 200 Indigenous children whose remains have been found at the Kamloops, B.C., site of a former residential school need to be told, First Nations leaders say

The one in Kamloops was Catholic.

Would the lowest standard for “love thy neighbor” be not to kill him? 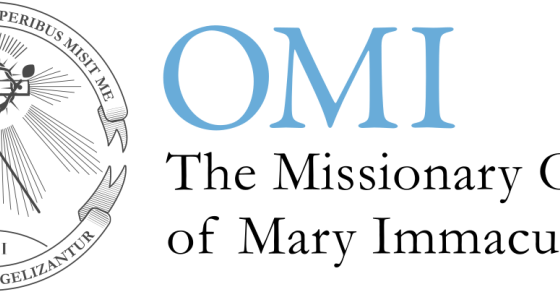 The spokesperson for the religious order that ran the Kamloops Indian Residential School for decades said the group has reached out to Tk'emlups te Secwépemc Chief Rosanne Casimir to offer . . .

Ah yes…another reason why I am SO glad to have left religion and want nothing to do with it. Being a nonbeliever definitely has its perks! How much do you want to bet that they used their God to justify whatever bad things that they did. 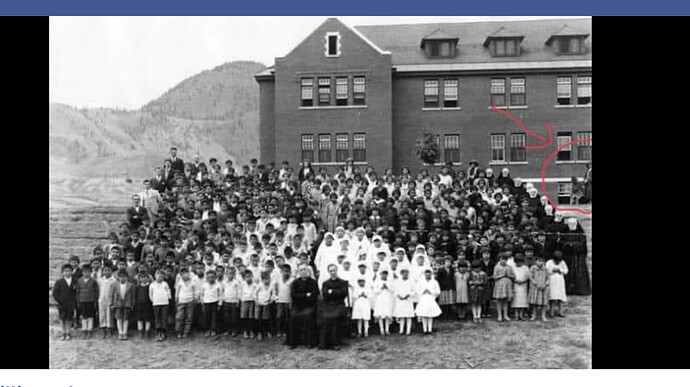 What are we looking at?

Is it not showing? its displaying on my end. The school in Kamloops where the 215 children were buried.

I can see the image, yes, but it was not clear to where it was, who it was showing, and what the red circle and arrow is pointing out.

Complicit. A word I became familiar with during the Trump administration and the word that comes to mind when I read about stuff like this. Complicit, complicit, complicit. How many people had to know about this? Hundreds? Didn’t they care about the suffering and death of children? I can’t decide which quote more applies. Is it “The banality of evil” or “The road to hell is paved with good intentions”?

Lol! I’ve spent the last few morning on FB posting in Catholic groups, newspapers, etc. Also political figures (regarding taxes everyone has paid for the government’s role in colonization) BUT the Churches that had direct responsibility for the treatment of children face HAVE NOT paid previous “settlements” nor have any individuals been charged with crimes. 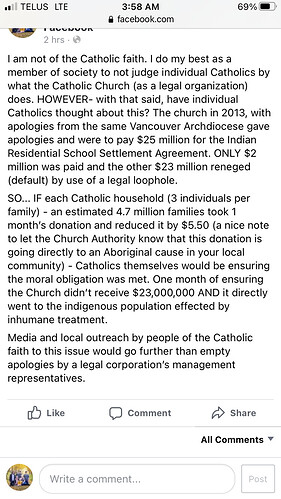 215 children’s bodies found … there are no words that can excuse such actions.

Apparently this “forced assimilation” was a money-making venture for churches too. They held fund raisers, bragged about how many indigenous children they would “save”. 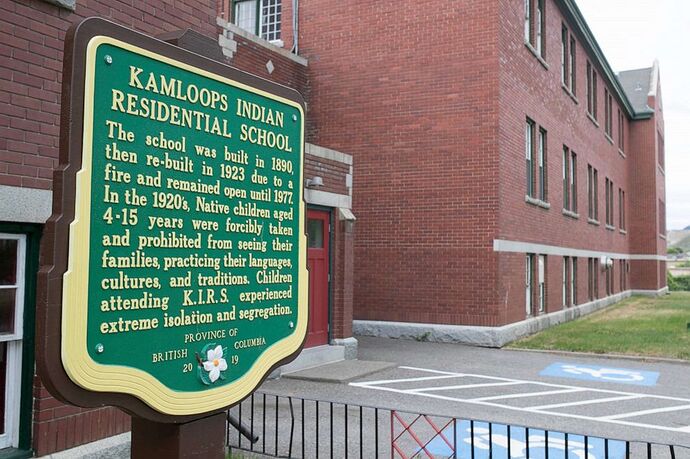 We did the same thing in America with our indiginous populations.

It is estimated that at the time Columbus made his famous voyage, the populations in Europe and the Americas was similar. Each had cities, trade routes, and established cultures. Once the Europeans had finished with their disease and guns, the indigenous were truly recipients of genocide. 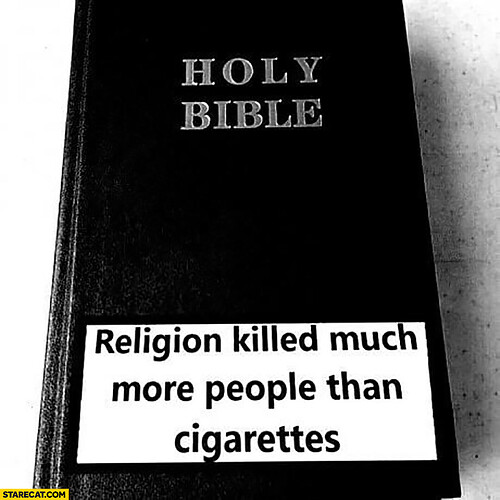 They found another mass grave of unwanted children behind a home for “unwed” mothers in Ireland a few years ago. The catholic church has had blood on it’s hands for centuries and all over the world.

The government at the time knew which church to give the vast majority of “contracts” to.

The catholic church has had blood on it’s hands for centuries and all over the world.

Imo, the church became corrupt some time in the late first century when it became an hierarchical organisation.

It became ineffably corrupt in the fourth century when Emperor Theodosius 1 made the sect we know as Christianity the state religion of the Roman empire.

With the emperor’s approval and encouragement the church began murdering dissidents and burning their books. That is why very few documents survive about the dozens of other sects which followed ‘The way’ of Yeshua Ha Notzri.–The church continued that practice with gay abandon until the seventeenth century. (the protestants joined in pretty much as soon as they were invented)

Imo the church was and remains a deeply corrupt organisation. Just be grateful they are no longer allowed to burn people alive. If they were, burnings would be shown on cable at half time at the football, in countries all over the world. (what with capitalism being amoral and all)

My heritage is Danish ,Norwegian, and German, so if someone asks me about my family history or what nationality I am, I just tell them I’m a Viking. Having read some Norse and Viking history and learning what the Catholic church and Christianity in general did to those cultures and to their belief systems is appalling. It was the same as Muslim" extremists" today, convert or die.
And let’s not forget about how the Catholic church helped the Nazis during World War l l.

My heritage is Danish ,Norwegian, and German, so if someone asks me about my family history or what nationality I am, I just tell them I’m a Viking.

You’re not a viking or even “viking”. The viking age ended a thousand years ago, in 1066 CE. If you live in the US and hold a US citizenship, you’re from the US. If you don’t hold a scandinavian passport, you’re not scandinavian. It’s as simple as that. “Viking,” my ass. Source: I’m scandinavian.

Having read some Norse and Viking history and learning what the Catholic church and Christianity in general did to those cultures and to their belief systems is appalling.

That is true. But they did go heavy-handedly out in the same fashion everwhere else, too. Conquer and “convert” by sword, by torture, by threats, by physical violence, by confiscating property, by holding hostages, etc.

It was the same as Muslim" extremists" today, convert or die.

No need to single out a particular religious faith; extremists by any faith are extremists.

I just tell them I’m a Viking.

Viking is actually a verb, not a noun.(or it was once).

My heritage is Irish on both sides. We’ve only managed to trace both families back 300 years. However, there is still a place name consisting of my paternal family name in Clare. As far as I can tell, the family name is ancient. Perhaps due to lack of literacy in the past, there are half a dozen apparent derivations. World wide, there would be thousands with the same background, and perhaps the same origin. The etymology of the name is rather broad and ambiguous.

My mothers family left county Clare in the late nineteenth century. They went to Canada and got rich. My father’s family moved to Adelaide South Australia in 1870 and got children***.

When I’ve been in Ireland, I’ve always said "I’m Australian by birth, Celt by blood, 100% ". That partly from pride but mainly so they wouldn’t think I’m English. Many Irish sill hate the the English. The hatred is bone deep and goes back centuries.

Interestingly, when I told people my family name, they could place my family accurately, to a county. Many Irish names are place-specific. (or were until quite modern times)

***More impressive when it is realised that the free colony of South Australia was only founded in 1836.

We know a bit about my father’s early family because we have the ship’s manifest showing them as passengers, in the maritime museum. I’ve seen two graves in Kapunda, South Australia, which was a copper mining town at the time.

Ironically, we know a lot more about my mother’s family from the time of their arrival in Canada. The family became very rich, so there are some records because of that. It was my grandfather Frank and his brother Lester who made the Patrick name famous, in hockey. There is even a book. Read by the family of course and possibly as many as 100 others.

Viking is actually a verb, not a noun.(or it was once).

What is your source? Judging by the (admittedly modern translation of) Heimskringla (the old Norse kings’ sagas), typical usage would be to describe a person or describe a type of journey – “to go in viking”, meaning going on a viking journey. Yes, this may sound weird, but that’s how it’s used. According to norwegian dictionaries (1, 2) and an encyclopedia, the term viking does not stem from a verb, but rather a a noun. It’s not exactly clear what the original meaning was, but the etymology suggests describing a sea warrior, a sea pirate, a man from the Viken area of old (area around the Oslo fjord), a participant in a long sea journey, or a warrior fellowship. There are other interpretations as well, but as far as I can see, none of them are a clear cut verb.

What is your source?

I can’t actually remember to be honest, so feel free to take my claim as hearsay.
I was aware of the phrase ‘to go viking’.

Quite happy to stand corrected.