" King of Confidence: How an atheist convinced Mormons he was church founder Joseph Smith’s heir and crowned himself monarch of a Lake Michigan island - before his followers murdered him because he forced women to wear pants 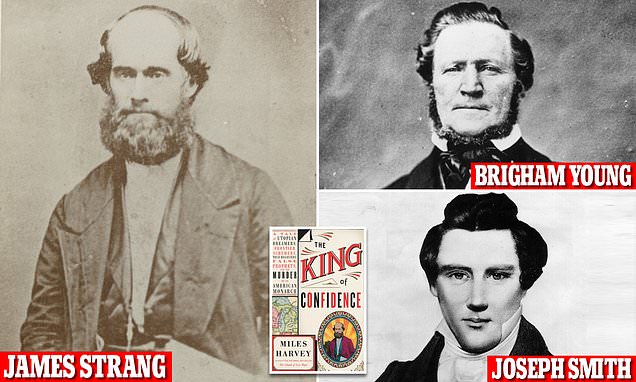 A new book by journalist Miles Harvey examines the life of James Strang, a 'confidence man' who had five wives, many professions, and built a kingdom before his death on July 9, 1856.

Have you read it yet?

Was it any good?

Yup… post was delayed ,so book was late arriving … but I finished it today…

Not what I was expecting … but yes …very interesting.

I always thought that Joseph Smith was a “con man” … and this book sort of confirms it. But far more interesting is just how easy it was for his (to our eyes …) obviously false narrative to be believed.

Then ,after Smiths death …Strang turns up and presents himself to the Mormons ,claiming to have a letter from Smith appointing himself (Strang) as his successor.
The letter was ,of course ,written in hieroglyphs ,which only Strang could read.

Strang goes on to appropriate Beaver Island in lake Michigan … makes it a Mormon Territory …expels all non Mormons…starts raiding by land and water… following the Law of Consecration… ( basically stealing anything you want as long as you’re not stealing from a Mormon) Strang goes on to declare himself “King of Heaven and Earth” and his followers went along with it!

It seems that something very strange was going on at that time period and in that place,

Its definitely worth a read … and shows some very odd people making some very odd decisions. But then…I’m not sure we can properly judge … after all look who got put into the Whitehouse.

Yes ,on the whole I think I do recommend it

And there in lies the issues with group thinking and cult mentality.

It never leads you along the path of sanity.

You never know, with the exponential growth of technology, hopefully we collectively get more intelligent and less ignorant, one day we can put all these superstitions back in the caves where they belong.

Still, sounds like a good read, I often find I get exasperated watching films or reading books about delusional people, I always want to grab them by the shoulders and shake vigorously.

I’ve got a long list of books that I’m chipping my way through, so I doubt I’ll read it myself anytime soon