Great Moment To Remember in Christianity

There are so many remarkable Christian moments that I thought we should have a thread dedicated to their memory. Feel free to mention your favorite Christian historical moment. I will get us started…

Okay, I just gotta mention one of my second all time favorite moments to remember in the Christian faith, aside from the Jones’Town Kool Aid drink-athon, was the ever popular foreskin exchange that resulted in the acquisition of a bride. “Michal’s story is recorded in the first Book of Samuel, where it is said in 1 Samuel 18:20 and 18:28 that Michal loved David. … David took part in a further battle, killed 200 Philistines, and brought their foreskins to Saul as a double bride price.”

1394: In 1394, the people of Mortaign, France attended the execution of a local pig. The pig, which was female and apparently ownerless, had wandered into the local church, climbed onto a small altar or table and guzzled down consecrated wafers, set aside for the Holy Eucharist. The pig was promptly seized, put on trial, deemed to be guilty of blasphemy and hanged. (Praise The Lord and his mighty hand of Justice!)"

Hell, I tried to give White, Old Man’s foreskin and she just yelled at me and told me to get the bloody thing out of the house. Useless, completely useless.*

Hell, I tried to give White, Old Man’s foreskin and she just yelled at me and told me to get the bloody thing out of the house.

I’d like to say in my defence, “it’s the thought that counts…” BUT I was feeling very Jehovahish that day. Sorta like when Cain and Abel bring gifts to god and only one is liked! The other sucked.

I wanted a young, pert foreskin - not some wrinkly, excess saggy skin shit!

I wanted a young, pert foreskin - not some wrinkly, excess saggy skin shit!

I will have you know I regularly have a “foreskin tuck” to keep myself perky and young looking. Cog had been hanging around my ensuite and stole some excess from my vanity. I tend to keep some hanging around as it comes in useful for patching various grazes and injuries when I fall off my trike.
That is why I laugh so hard when people say " Old Man, you are such a prick!~". In my case it is literally true!.

I’ve always been rather fond of the sadly defunct practice of the auto de fey. This took the form of a huge barbeque, using people as fuel.

The auto da fey was done by the office of the holy inquisition. I understand it was begun when the church massacred the Templars in 1307 and later the Cathars at around that time. It continued burning people for centuries.

The office of the holy inquisition is still extant, albeit under a different name and without burning privileges. A recent head was Ratzinger, who was pope Benedict the XVI.

While in Italy, I was in one of those churches which has an entire , actual saint, on display. He’s kept in a glass coffin in faded finery slowly mouldering away. It’s quite gross. Anyway, I got talking to this bloke whose English was much better than my Italian. He told me that the head of John The Baptist has survived and is on display in two churches.

I outlined the most plausible reason. IE that one of the heads was of John as a younger man. Fair dinkum, the bloke came over all hostile and chicken lipped.

My thinking was and is that anyone who will believe the head of a probably mythical figure has survived for over 2000 years will believe literally anything. That’s why they’re christians

Oh, hold the phone, my all time favourite just popped ;The levitating Saint Joseph of Cupertino . 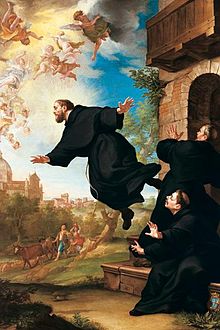 Saint Joseph of Cupertino, O.F.M. Conv. (Italian: Giuseppe da Copertino; 17 June 1603 – 18 September 1663) was an Italian Conventual Franciscan friar who is honored as a Christian mystic and saint. He was said to have been remarkably unclever, but prone to miraculous levitation and intense ecstatic visions that left him gaping.:iii Joseph began to experience ecstatic visions as a child, which were to continue throughout his life, and made him the object o...

I read about Cupertino; alleged to be one of the very first paʁkuʁ practitioner. He couldn’t actually levitate of course. But hell, make the man a saint anyway.