I have not seen the video yet but I imagine this stuff is like the fish I have eaten. It is called Hongeo-hoe (Hong-oh) It’s two sylables, the Koreanized Romanization rarely gets close to actual pronounciation. Hong-oh tastes like pure amonia. It smells like smelling salts. And honestly, I don’t even remember the taste. I have eaten a piece of it every time it was placed on the table. It’s horrible. Some Koreans really like it. 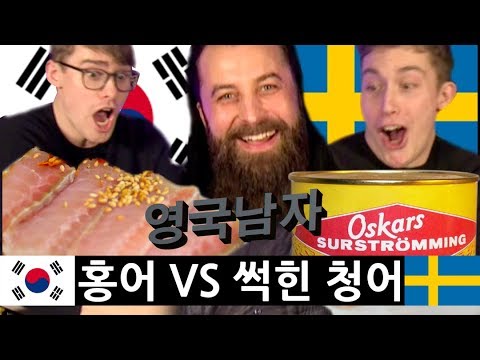 Could you give a non-Korean person’s opinion and explanation of Kimchi?

One of the worst things I’ve eaten would have to Chinese 100- year eggs, in China. It was a hot day and they were slimy. Chinese olives are also very interesting.

We have enough disgusting food of our own which I have spent a lifetime dodging. They include tripe (beef stomach) and sheep’s brains

and a minimum 20 word limit…

and a minimum 20 word limit…

I had deviled kidneys in about 1993. Never before or since. (although I love steak and kidney pie)

Last had lamb’s fry (liver) in about 1972, after not having had it for a decade. On eating it I immediately remembered why I hadn’t had it for 10 years.

We never had offal at home, dad wouldn’t allow it because he considered it poor people’s food.

My late dad used to make a stuffed heart, in a red wine gravy.

It was pretty tasty…liver and onions as well, though these can be very easily overcooked and rendered into tasteless rubber.

I’ve had warm chicken livers in a restaurant, damn fine I must say. Steak and kidney pie can be very nice.

Traditionally good recipes were created to make the less desirable and therefore cheaper offal more palatable, but this is no reason to avoid all such cuts. That said, I can’t see me bothering with tripe if I’m honest.

Yeah I don’t mind the poor people’s food. It all depends on how its cooked and who cooks it. Fried chicken livers with mushrooms and mash potato…Steak and kidney too…I’m still hungry.

We have enough disgusting food of our own which I have spent a lifetime dodging. They include tripe (beef stomach) and sheep’s brains

Could you give a non-Korean person’s opinion and explanation of Kimchi?

Imagine “Sauer-Kraut” seasoned with red hot pepper. Kim-chi is also, just a bit less sour generally as it is made with the full leaves of the Chinese cabbage. The pieces are not as permiated with sourness like Kraut.

Kim-chi is also eaten in three stages, fresh (Wow this is good! Crispy, crunchy, and cool. A spicy summer salad. Yummy.) A middle stage which is wilted and tasteless IMO. It’s just wilted cabbage with salt and red pepper. (Not so good) Then there is the third stage, sour kim-chi. The longer it is left to ferment, the more sour it becomes. Great as a side dish or mixed into a stew. (Kim-chi Chee-gay).

There is a version of Kim-chi (Mul Kim-chi) Water Kim-chi that is white, sour, and very much like Sauer-kraut. Again the salty brine of Kim-chi is not quite as sour as that of kraut. In Korea, they say that this version of Kim-chi is Japanese. I can’t verify that.
Koreans say a lot of things about Japan that are less than on target.

One of the worst things I’ve eaten would have to Chinese 100- year eggs,

I saw stuff like that in China. LOL I managed to eat some of the insects at the open markets. I had baby chickens on a stick. (I mean just hatched or possibly pulled from the egg just before hatching.) Imagine a tasteless gummy worm that you seasoned with salt and spice. I was not brave enough to try any of the egg treats… and I consider myself fairly adventurous when it comes to food.

Similarly, in the Philippines they have “Baloot” Rotten (Aged) duck eggs. When the egg is cracked open, there is a baby duck on the inside. Some sort of sauce, vinigar and spices is pourd into the top of the egg and slurped out. I guess they eventually eat the duck that is inside. I have never stayed to watch the entire ritual, nor have I partaken. I have been visiting the philippines for 20 years and have never had the desire to give the eggs a try.

I’ve had warm chicken livers in a restaurant, damn fine I must say

I love chicken livers and make a pretty good pate.

Indeed, and it’s a lot harder to make a decent tasting meal with poor ingredients.

I’m very lucky, because chicken is the cheap meat here. I usually buy chicken breast fillets @ $10 a kg. Pretty hard to stuff that up. A lot easier to stuff up say meatloaf. I know that’s true because I did about 2 weeks ago. Pork and beef minced meat. Should have been terrific. I put in too much sweet paprika and it was awful. Major quite liked it.

I nearly always buy chicken thighs, cheaper than chicken breast and more taste. Easy to prepare as well. They have the added advantage you can freeze the bones and make stock from them.

It would break my heart to thrown out a chicken carcass, not only does it make excellent stock, but even after it seems to have been picked clean, there’s more than enough meat left to make excellent soup.

I pressure cook the carcass on high for about 20 minutes, then separate all the solids to cool. It’s easy to pick off all remaining meat.

I also have a simple recipe for braising beef brisket in red wine. Another cheap cut that is very tasty if cooked properly. Long and slow, 5 hours usually.

I prefer them too. So do many other people . That’s probably why they are around $2 a kg more expensive here.

Of course I’m referring to boneless and skinless fillets, so much easier to cook. Rarely buy a whole chook or even chicken pieces. Often cook them in the air fryer. I prefer meals which are ready within 30 minutes or less. The microwave is my friend.

I prefer them too. So do many other people . That’s probably why they are around $2 a kg more expensive here.

Yikes, they’re way cheaper than chicken breasts in the UK.

Rarely buy a whole chook or even chicken pieces.

I roasted a whole chicken maybe 3 weeks ago, my first in a considerable while. I buy chicken thighs with skin on and
the bone in. I usually buy a tray of a dozen for around £3.50 mark. I skin bone and chop 8 into two containers, then just bone and trim some of the skin edges and fat of 4, for roasting or frying.

The chopped meat makes either a curry or a casserole.

I also use the pieces or chicken wings to make chicken tikka.

I also use the pieces or chicken wings to make chicken tikka.

These days I can’t be arsed going to any trouble. Very fond of one pot dishes. Use my electric wok a lot for general things. . (it’s really not hot enough for Chinese stir fry) Also have a rice cooker.

These days I buy various masalas from the local Indian grocery. No longer make the diverse sludges to go with.

Have a great local Chinese grocer with all kinds of fresh Chinese vegetables, which I use for Chinese inspired dishes about once a week. Usually have fresh garlic ginger and chilli on hand. Currently ginger is about $25 a km and is of poor quality (not mature) so I bought minced in jar. It’s OK.

It’s like me and gardens; I love gardens but not the associated work. These days I pay a young bloke. I over pay him ; he does a very good job so I want to keep him.

Very fond of one pot dishes.

Oh me too. Always loved my slow cooker, and I bought an Instant Pot electric pressure cooker a few years back, its fanfuckingtastic. It slow cooks, steams and sautes, and the stainless steel pot can go on the gas hob.

I often cheat with indian foods as time is limited what with work.

Pataks do jars of spice mixes preserved in a little oil.

Pataks do jars of spice mixes preserved in a little oil.

Oh yeah. There was a sweet mango chutney of which I was very fond. Not sure if it was made by Pataks. Also buy Green Thai curry in jars.

@boomer47 Pataks is very much respected, as a brand of Indian pickles. Their garlic pickle is spicy, but awesome. I would definitely recommend it.