Hi there,
the Occam’s (not Hitchens) razor “also called law of economy or law of parsimony, principle stated by the philosopher William of Ockham(1285–1347/49) says that pluralitas non est ponenda sine necessitate, “plurality should not be posited without necessity. The principle gives to simplicity: of two competing theories, the simpler of an entity is to be preferred. The principle is also expressed as “Entities are not to be multiplied beyond necessity”. (Occam’s razor | Origin, Examples, & Facts | Britannica).

"Therefore, when a theory is economic and coherent, and converges towards the results of other theories, framing itself in a concordant and homogeneous mosaic, it is up to those who support different theses to dismantle this theory, taking on the task of having to refute a whole building of results between they are firmly interconnected. Those who continue to support the thesis of miracles, because they believe that God manifests himself in the world through them, must therefore not only answer all the questions raised by the various philosophical objections, but also face the immense task of disproving science, demonstrating that in miraculous phenomena the laws of nature are suspended or altered. Then imaginative hypotheses, transcendental theses made of words and verbal reasoning are not enough, nor can one take refuge in the bosom of God, thus masking one’s inability to explain the world ".
(Maurizio Magnani, Spiegare i miracoli. Interpretazione critica di prodigi e guarigioni miracolose. Edizioni Dedalo, Bari. 2010, end of chapter n.2 ).

Let see what Christopher Hitchens wrote criticizing the Buddhist group of the Imperial Way created by Nichiren japanese sect:
“They consist, like most professions of faith, simply in assuming as a given what should be demonstrated. Scientists have an expression to indicate useless hypotheses even to learn from the errors they contain: they are NOT EVEN WRONG. Most spiritual talk is of this kind”.
(Christopher Hitchens, Dio non è grande, come la religione avvelena ogni cosa, Edizioni Einaudi Torino 2007 chapter 14 p.192)

Now. If define themselves agnostics, instead of atheists, it means to follow linguistic quibbles which they’re so dear to theists, let’s go in the middle of Sain Peter’s square during the Pope’s Angelus and kneel waving a white flag with our hand.
I don’t want to waste my time explaining why I don’t believe in fictional characters who have the same credibility as the tooth fairy, Santa Claus, or any other fictional character that anyone has come up with.
Is that an atheist republic? If it’s so, please change name to this forum.

With all my respect, Paolo

If it’s so, please change name to this forum.

Wow, that is a grandiose and ego-driven statement. I suggest that when you get off your high horse, dissipate a lot of your anger, and learn more about atheism, then you can submit your kind offer to the owner of this forum.

the Occam’s (not Hitchens) razor “also called law of economy or law of parsimony, principle stated by the philosopher William of Ockham(

Uh… did you read and then “click” the link? 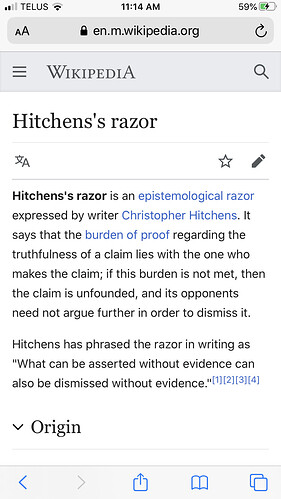 Then back to Hitchens…

They consist, like most professions of faith, simply in assuming as a given what should be demonstrated.

hypotheses even to learn from the errors they contain: they are NOT EVEN WRONG. Most spiritual

I assumed this is the source? 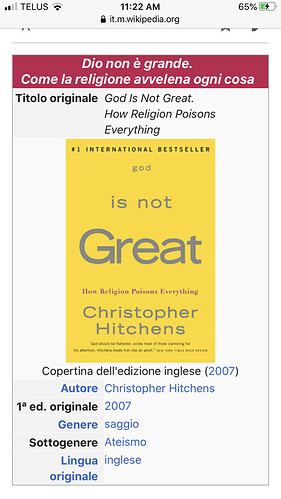 So I google searched because I do not have a copy of Hitchens book and cannot read it for myself in English to ensure it is correct and in context.

Here are other quotes from him:

God Is Not Great Quotes by Christopher Hitchens

246 quotes from God Is Not Great: How Religion Poisons Everything: ‘Human decency is not derived from religion. It precedes it.’

You started this, asking about fictional characters.

AR is a platform - fucking post on it like it’s one. No one here is a “follower” of AR.

With all my respect, Paolo

At best you are a POSER.

No Sir. Everything that has been created supposes the existence of a creator. And if it was not created, it means that it has always existed. Not necessarily in the same form.
Returning to the insults I have been made the subject of on your part … I do not want to reply, your behavior does not even deserve a mention to the administration of this forum.

Being challenged on a forum in which a book entitled “Why There is no God” is widely advertised, sounds at least inappropriate to me. Peace.

Everything that has been created supposes the existence of a creator

Show me one thing “created”.

We have evidence of energy changing form via chemical interactions and conditions.

Humans can “create” by physically manipulating form and changing (on purpose) conditions.

I assumed this is the source?

Are you more cozy with your mother tongue?

Yes of course. I don’t know Italian or French… I know some sign language but usually I offend the deaf.

Show me one thing “created”

Nothing, Anything. That’s the point. Nothing can be created out of absolute nothing. Zero is zero. Do we agree on this? Did the raw material of the big bang exist? Would the Big Bang have reason to exist in absolute vacuum?

Nothing can be created out of absolute nothing.

WE DO NOT KNOW

We do not have an example of “nothing” to make valid comparisons or test. Therefore that proposition is untestable, and can not be proven or disproven.

So then why the fuck are you talking to us like WE give a shit OR are theists???

Go to a fucking theist forum.

BTW DID you see or acknowledge YOUR misquote of “Hitchen’s razor” to correct it to Occam’s razor when that was not required or the point???*

You wrongly “corrected” David and gave a Hitchens quote using Italian instead of English. Both the quote (I assume) and source…

Would the Big Bang have reason to exist in absolute vacuum?

I can not identify the characteristics of “nothing”. But I am very certain “absolute vacuum” is not within that description.

An absolute vacuum is a complete absence of any molecules or atoms. But even in an absolute vacuum, it will still be affected by gravity and time, light waves and other forms of radiation would travel through it, and it has dimensions.

Did the raw material of the big bang exist?

You started this, asking about fictional characters.

@Whitefire13 So we are not allowed to talk about Harry Potter or Gandolf? Bummer. LMAO!

@anon33523147 I sincerely hope you educate yourself on the evolution of this known universe.

The “big bang” is just a stage in the evolution of this universe. In fact the more correct term is “rapid expansion”. Science has allowed us to probe back to that period in time. But before that time period, the laws of physics break down, and we do not know what were the conditions pre-big bang.

But that instant in time is very similar to childbirth. A child comes into the world, and no one presumes it came out of nothing. That is what the big bang is, an instant in time when it is born.

No Sir. Everything that has been created supposes the existence of a creator. And if it was not created, it means that it has always existed.

If there is no creator, and the universe is eternal, as you say, provide proof to justify your claim. Thanks.

I enjoy some VR game time

YET ANOTHER ignorant presuppositional apologist.

As Pablito has clearly demonstrated, such folks tend to twist ideas they have misunderstood to fit their personal superstitions.

Now I’m not saying there is necessarily anything wrong with that position in principle. One needs to be able to fit in with fellow believers. I have no problem with that, none of my business.

It becomes my business when such ignoramuses come to my debate forum, insisting that their half understood ideas and ignorance of basic concepts (such as “atheist”) are simply right. That everyone else, including the entire scientific community are wrong. Revelling in their ignorance, such people seem incapable of conceding that they could possibly be a mistaken about any of their half baked claims.

This typical approach of presuppositional apologists is nothing more than hubris and wilful ignorance of the first water. I have no time for it. .

I have not tried VR yet, but it sounds pretty cool.