Do you fear death?

@Grinseed Shoot. I must have missed doing this, when I first joined the forums. LMAO!

it boasts a considerable number of very talented and knowledgeable people and I have learned a great deal from them and as a consequence I have got to know some of them pretty well and there is not a single one I do not like.

Jesus, Big, how many times do I need to tell you? shhhh!..and besides its the first AND second rule of Debate Club, I swear I’m gonna get it printed on a tshirt for you.

I think I might have missed your opener…but hey…you lived…lol. You want your money back or something?

Jesus, Big, how many times do I need to tell you? shhhh!..and besides its the first AND second rule of Debate Club, I swear I’m gonna get it printed on a tshirt for you.

I think I might have missed your opener…but hey…you lived…lol. You want your money back or something?

@Grinseed I don’t think I ever did an opener. I just dived right into the discussions and got to work.

Is it a sin here to ask about forum rules or ask why chat is taking place in a forum labeled “Debate?”

On the top right there is a three bar icon. Click on it and select “About”, which is at lower left of the pop-up menu. And then select “Terms of Service”.

This is not a chat room, although some replies are quick and the some members are casually intimate with each other. But we are all adults in here, and we do not follow hard debate rules.

We are all different individuals, some members may be gentle and polite, some may be “In-your-face tough love hard words shock therapy”.

I allowed you to derail this thread into a few hours of just personal insults, admittedly from many parties. We encourage free speech and the ability to express yourself.

This environment may appear to be haphazard, and at times it may become chaotic. But it does accomplish it’s mandate, to encourage discussion, to freely exchange ideas, and a place to learn.

If you do have issues, then please send me a private message, and the Admins will work things out.

Is it a sin here to ask about forum rules or ask why chat is taking place in a forum labeled “Debate?”

Was there an actual proposition, that was worth a shit, posted upon which a debate could ensue? No Gods has never started a thread so what in the fuck is he talking about? I think he means “I made a comment once and no one liked it. Waaaaa.”

He has read sixty posts, and replied 4 times. He has had visits on 2 days. Holy shit… he is an expert on the site!!!

HINT: You want a debate, start a thread. Can you construct and defend a clear thesis?
Can you create a clear and concise syllogism?

Death is not as natural as anything you listed.

existing in or formed by nature (opposed to artificial):a natural bridge.

based on the state of things in nature; constituted by nature:Growth is a natural process.

of or relating to nature or the universe:natural beauty.

of, relating to, or occupied with the study of natural science:conducting natural experiments.

When you say " [quote=“NoGods, post:54, topic:1776”]
“our” meaning a common aversion many humans have in general.
[/quote] Instead of making assumptions, why don’t you just speak for yourself. Not all societies fear death. Not all cultures fear death. Open your eyes and look over the wall surrounding your little cloistered world view.

“Modern” Homo sapiens (that is, people who were roughly like we are now) first walked the Earth about 50,000 years ago. Since then, more than 108 billion members of our species have ever been born, according to estimates by Population Reference Bureau (PRB).Jan 23, 2020"

8 billion is what percent of 108 billion? If you guessed 7.41 percent, you are a winner. That means 92.59 percent of humans, ever born onto this planet, are FUCKING DEAD. Now I don’t know about your string of logic but that tells me DEATH is pretty damn NATURAL. It is NATURAL for most humans that have ever existed, to be DEAD.

If you have a different definition of natural, please share. 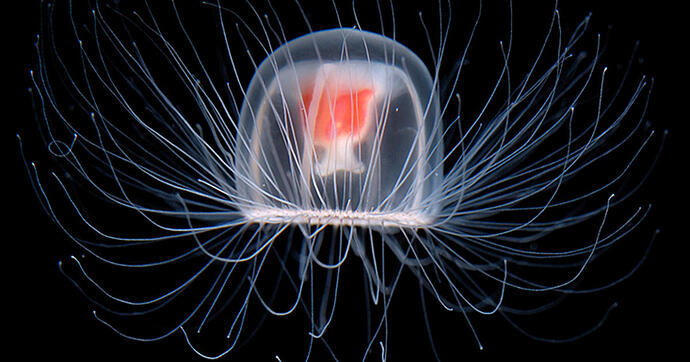 The "Immortal" Jellyfish That Resets When Damaged | AMNH

Hahaha - the “immortal” is the click bait. BUT the researchers (humans) are driven to look for ways of life extension.

Thank you for the heart pretty lady. Some people just say stupid shit without thinking about it. … Not Me! …

I also know it does not take much for people to totally misread the intention of text comments.

What the fuck is that supposed to mean exactly?

I’ll get my coat…

By coat, you mean “rain coat” an allusion to rubbers, condoms, contraceptive device, sheath of protection, and the ass ramming that is going to occur should this continue? Hu hu hu, that’s what you mean isn’t it. Fucking people misreading posts on the site all the time. Where are the mods when you need them?

Where are the mods when you need them?

Pass me the fucking phone and get your hairy ape body off me!

(post withdrawn by author, will be automatically deleted in 24 hours unless flagged)

I made an innocent comment but I got worried that Cog might misunderstand it as soem sort of threat of uncontrolled and unnatural violence involving doors and arses…you cant be too careful around alpha* apes.

you cant be too careful around apha apes.

Tell me about it!

Where are the mods when you need them?

Ouch, talk about prodding the bear. I can hear White getting her rolling pin now.

Are you honest enough to admit your opening post was less than an innocent enquiry of where to begin your ‘debate’?

Lets recap.
" Is that what this “debate” forum is for?
Fuck it."

I am looking for a debate. With theists. That’s why I joined this forum. I doubt any of you will believe me at this point, but I did NOT intend to get into a debate or argument with anyone with that initial post. It was an honest question: is the clearly labelled “Debate” room just for debate or not? Especially since there’s an explicitly labelled atheist-only room. I’d considered this topic might just be something the forum admins wanted everyone (theists and non) to answer, and that general chat might be posted in a “debate” room. No one said that. Everyone just started insulting me, including you.

In my vernacular, “Fuck it” in that context just means “never mind,” which is why I continued to provide a response to the OP.

And when I explained why I asked the question in the first place about forum rules and conventions and said I was confused about the conventions, I was insulted and attacked again and again. Why the fuck would any of you insult someone for saying they were confused about your forum rules?

I’m not trolling this forum. But I am not going to be insulted without responding however the fuck I want to.

No forum is perfect (as someone else suggested I look for.) I’m just looking for one where the rules are reasonbly clear and can be asked about. I do have a coarse tongue, and use expletives regularly. I’m honestly sorry I offended you by using scare-quotes around “debate” and saying “Fuck it.” The scare-quotes were a bit of shade at worst.

You asked me if I wanted my money back. My skin isn’t thick, but even if it was, that’s an insult where I come from. Maybe it’s not where you’re from, but why would you expect people from other parts of the world to take that kind of response as anything other than an insult if they tell you it’s an insult?

I’m sure all of you will insult me and lie to yourselves about your own behavior until you’re comfortable.

If you do have issues, then please send me a private message, and the Admins will work things out.

I can not undo the past, but I can act for the present.

Steady on, I’ve been doing that for years. Solution; removed the offending mirror.

However, our new little friend does seem a smidge judgemental of people he hasn’t met.

About 40 years ago I had concluded everyone was against me. Finally forced myself to consider that (a) I was paranoid or ( b) the fault might possibly be with me. (c) that ‘everyone’ was a bunch of cunts. (d) it was a combination of those things; that was the one I went with.

I am looking for a debate. With theists. That’s why I joined this forum.

You joined an atheist forum to debate theists?

Nope, be a dear and explain it to me one one more time. Don’t forget to use lots of insults, and be as condescending as you can.

I’m sure all of you will insult me and lie to yourselves about your own behavior until you’re comfortable.

Reread your responses to my posts champ, it’s you who owes me a fucking apology.

I always give people the benefit of the doubt, but you threw it in my face in a petulant tantrum.

Had you calmed down and not had such a chip on your shoulder you might have found some value from this forum, as many others have. You preferred to indulge your temper tantrum.

As indeed you have here again.